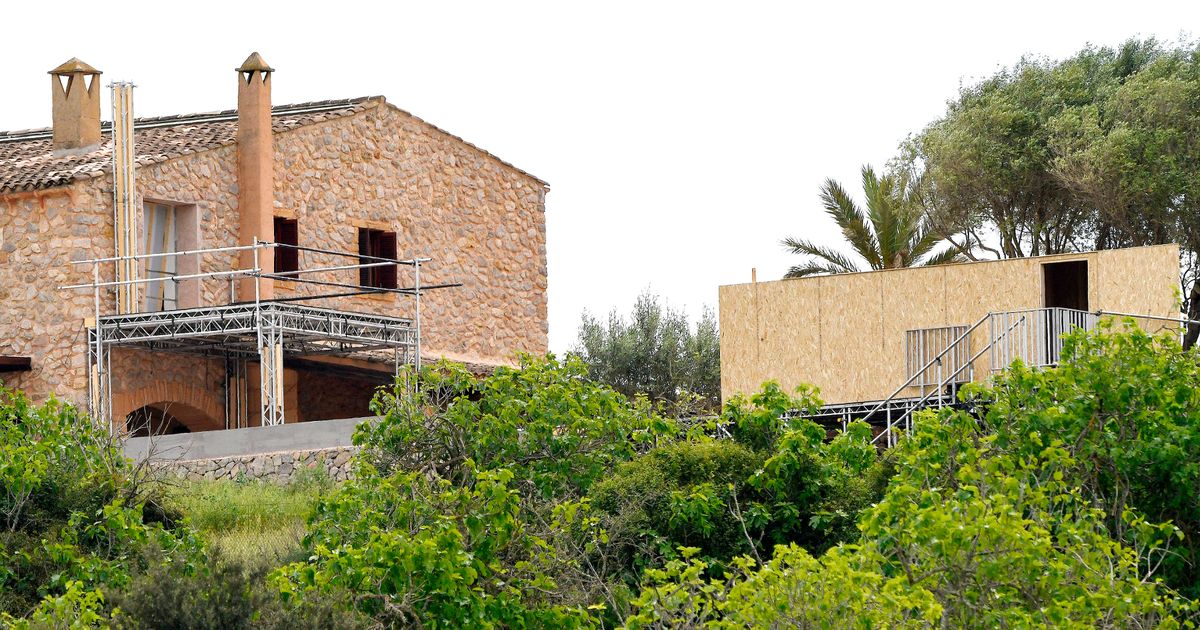 Love Island is returning on June 6 and the Mallorcan villa is well underway, ready for the sexy singletons

The ITV2 dating show will be back on June 6, with 37-year-old Laura Whitmore hosting the series as usual.

Her husband Iain Stirling will be the iconic voiceover, which he has done since the show started.

The rumoured line-up has been released – with the likes of Zara McDermott’s brother and a former WAG said to be joining this year’s cast.

Now, fans can take a first look at the Mallorcan villa where filming is set to begin in less than a month.

The isolated villa is currently getting re-vamped to have the iconic Love Island stamp – which includes lots of bright colour and fun neon signs.

The Love Island villa is coming together
(

Builders were seen making last minute changes to the villa, with scaffolding around the outside of the complex.

The six-bedroom villa has been under construction work for the last few weeks, but it seems to be coming together ahead of the series return.

The rumour mill surrounding the identity of the contestants is in full swing, and according to The Sun, the brother of former Love Island star Zara McDermott will be heading to the Balearic villa.

Brad McDermott, who describes himself as an “artist” in his Instagram bio, is rumoured to be in talks with Love Island bosses about appearing in the 2022 series of the reality show.

“Brad is a young, good looking guy, and he has seen how appearing on Love Island has completely transformed Zara’s life,” a source told the outlet.

“Though she didn’t find long-term love, it has served as a great platform for her. She also had a great time there, and he thinks it would be a great laugh,” they added.

Workers were seen at the site
(

Sophie Draper is another rumoured contestant, and the 22-year-old beautician has a famous ex-boyfriend as well as a hefty following on Instagram and owns a beauty salon in Nottingham.

Sophie previously dated Aston Villa footballer Matty Cash, and lives a luxury lifestyle with holidays in Dubai, sharing regular updates with her 20,000 followers with pictures of her enviable physique and chic outfits.

Love Island bosses are reportedly intent on snapping up Ekin-Su Cülcüloğlu for the forthcoming series of the hit ITV2 show.

The villa is tucked away
(

The influencer, who splits her time between London and Istanbul, already has a host of celebrity admirers among her 345,000 Instagram followers, including The Only Way Is Essex pair Pete Wicks and James Lock, as well as Wayne Lineker, and Piers Morgan ‘s son, Spencer.

Ekin-Su, who has previously featured in the TV series Kuzey Yildiz in her home country, now looks set to hit the villa, according to the The Sun.

Basketball hunk Jordan Spencer, 27, is rumoured to be appearing in this year’s series.

The Sun reported the 6ft 2in sportsman is in talks with show bosses.

“It’s still too early to say whether Jordan is in the final line-up but bosses are keen,” a source told the publication.

Sophie Draper is rumoured to be joining
(

Brad McDermott could be going on the show
(

They added: “He’s been in talks to appear on Love Island and even met some of the producers who are working on the all-important cast list.”

Meanwhile, boxer hunk is reportedly also in talks with show bosses about appearing on the show.

It seems he caught the eye of producers with his jet set lifestyle and impressive career.

A TV insider said: “Joshua is a perfect fit for the show. Bosses are hoping he’ll follow in the footsteps of boxer Tommy Fury, who was a huge hit.

“Joshua is really handsome but there is much more to him than that – the girls will go wild for him.”