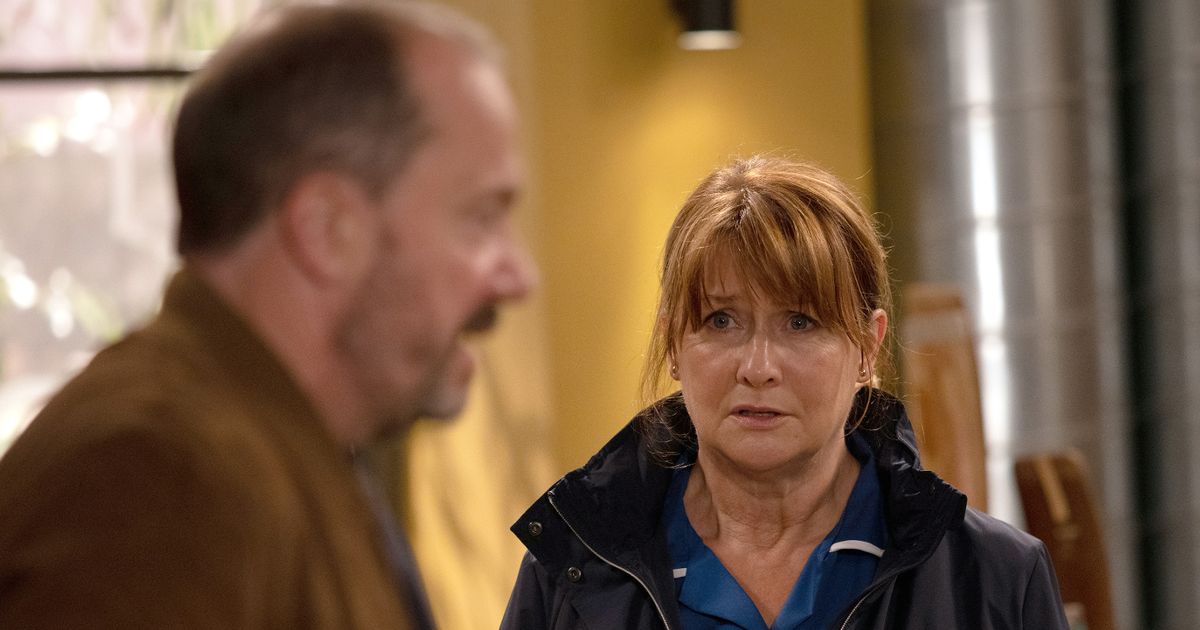 Victoria Sugden and Wendy Posner are held hostage in an armed siege on Emmerdale next week.

Wendy’s abusive ex-husband Russ has terrified her in recent weeks as he turned up in the village with the goal of getting his late mother’s money – which she left to his grandson, Victoria’s baby son Harry.

Russ has been worming his way into the village and blackmailing Wendy into silence in the process with a mystery secret – which fans already have some thoughts about.

Next week, Russ reveals that the reason he is on the run is that he gunned down a police officer in an armed robbery of a jewellery shop, terrifying Wendy.

Wendy Posner is blackmailed by ex Russ next week on Emmerdale

Russ pressures Wendy to get the money from Victoria, which she manages to do but feels huge guilt.

This prompts Russ to launch his backup plan as he gets a sawn-off shotgun from his car boot.

Victoria confirms to Russ that she will give him the money the following day and offers gratitude.

However, Wendy goes to the Hide and tells Victoria everything about what Russ has been doing and how he has been blackmailing her with something that could ruin her life if revealed.

Victoria Sugden is told the truth about Russ by Wendy

Russ launches his dangerous backup plan to get the money

Before Wendy can reveal the truth, however, Russ emerges wondering where his money is.

Trapped in the Hide with Russ, Victoria shows her disgust towards Russ for what he has done to Wendy and goes to call the police on the criminal..

However, Russ reaches into his coat and withdraws the gun and holds the pair hostage.

He orders Victoria and Wendy to hand their phones over before making sure the door is secure.

Wendy is terrified about how far her ex-husband will go

Will Victoria and Wendy make it out of their encounter with Russ alive?

Victoria and Wendy are terrified by what Russ could do next, as the villain cocks the gun and aims it directly at Victoria and orders her to transfer his mother’s money to him.

Meanwhile, armed police arrive outside the Hide as the situation worsens to the extent a full-blown siege occurs.

As the stand-off escalates, Jacob Gallagher, Dan Spencer and Wendy’s boyfriend Bob Hope are all outside when a gunshot rings out.

Has someone been caught by a gunshot? And, if so, will they survive?

*Emmerdale airs on weekdays at 7pm on ITV with previous episodes available on ITV Hub.