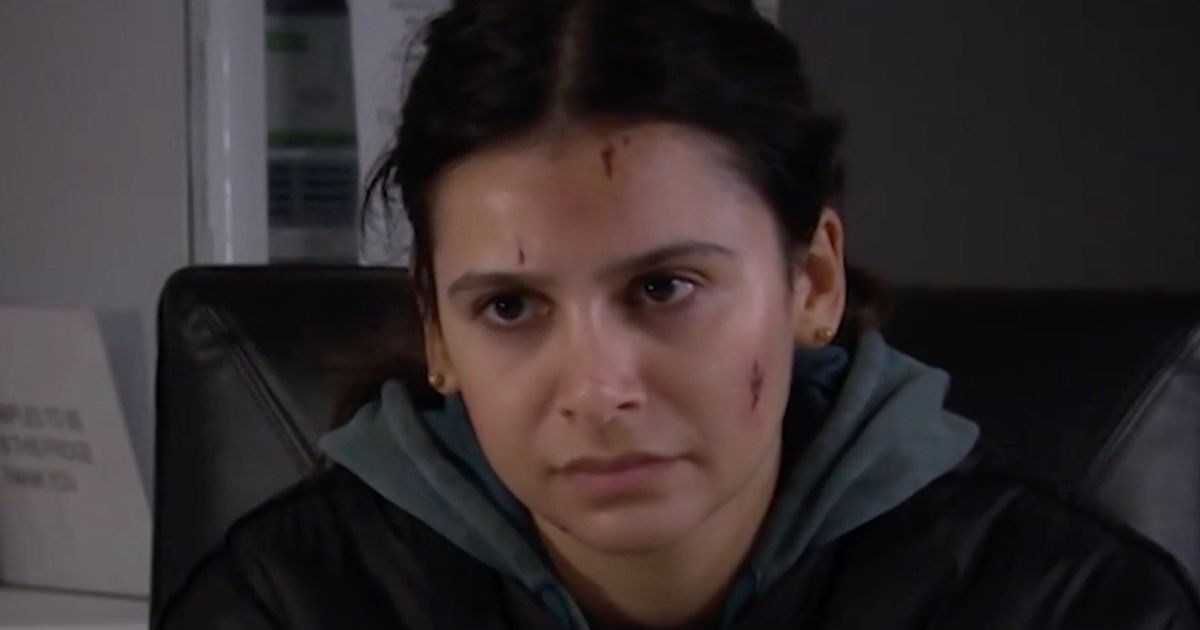 Meena (Paige Sandhu) has murdered four people so far and as she plans to kill off her fifth victim, her own sister Manpreet Sharma (Rebecca Sarker), she headed to the doctor’s surgery to try and find a means of doing so.

She went into Dr Liam Cavanagh’s (Jonny McPherson) office to write a prescription for some sleeping pills to help her kill off her own sibling, but she was caught by the GP who quizzed her on what she was doing.

However, she turned her crime into a sob story – and said she needed the tablets to help her sleep after a difficult few months.

Meena had originally told Billy she was pregnant – but she wasn’t. Her lie then went further as she claimed she had suffered a miscarriage during the Woolpack pub explosion on Christmas Day.

Fans have now been left convinced Liam will be the one to bring Meena down after spotting a clue in tonight’s scene.

On his desk, Meena notices Liam has a murder mystery weekend trophy, which he won on a trip to Blackpool.

And now viewers of the ITV soap are sure Liam – whose daughter Leanna was one of Meena’s murder victims – will be the one who will finally expose her after a crime-fuelled few months.

There was a murder mystery trophy on Liam’s desk

In the scenes tonight, Meena explained her ‘heartache’, as she told Liam: “It’s been hard Liam, I am not going to lie.”

He told her: “I had no idea, I am so sorry,” and asked her why she didn’t come and tell him what happened.

When he quizzed her on whether sister Manpreet – who is currently being held hostage by Meena, unbeknownst to all the other villagers – knew about her loss, she said: “If I tell her she’ll be on the first flight back from Ibiza, she’s got enough on her plate. I am so tired, I have barely slept since I lost my baby.”

“I’m so sorry, you should have come to me. I’m sorry, that’s a stupid thing to say in the circumstances,” he said.

Jonny had previously teased Meena is “digging her own grave”, as he said last year: “The situation is as it is. Liam has obviously just lost his daughter and assuming it’s an accident.

“But if he was to discover that somebody had killed her, let alone the fact that the person who killed her has been befriending him and acting as a kind of confidante, she’s just digging her grave ever deeper.”