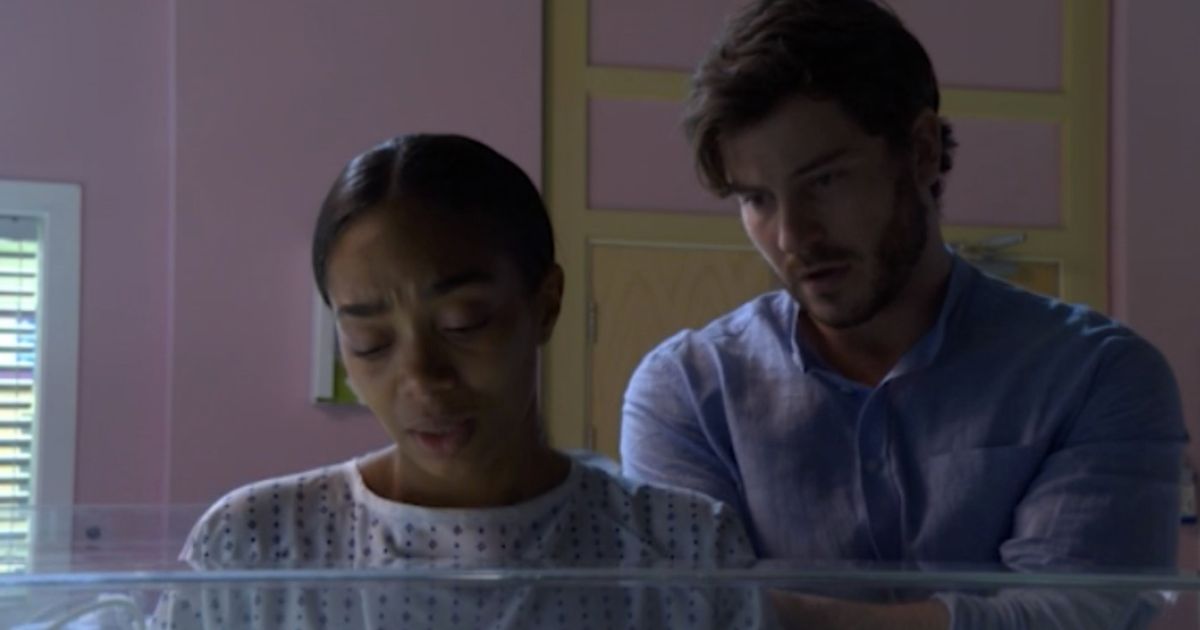 Chelsea had tried to flee with the help of Whitney Dean and Kheerat Panesar, after the duo revealed their plans to bring down killer Gray.

Whitney had discovered proof that Gray was abusive and manipulative towards his ex-wife Chantelle, who tragically died last year.

Of course fans know Gray caused her death when he attacked her and left her to die, and Kheerat has been suspicious over his involvement ever since.

Knowing Whitney had proof of the abuse, the pair admitted they both believed he killed Chantelle, and are now trying to bring him to justice.

Chelsea didn’t initially believe them, until she was secretly shown messages on a domestic abuse forum written by Chantelle, where she confirmed he verbally and physically abused her for years.

It seems Chelsea was ready to leave, but a twist in the latest episode of the BBC soap appeared to show she had changed her mind amidst her fears for her newborn son Jordan.

Chelsea went into labour early into her pregnancy after her attempts to flee with a load of Chantelle and Gray’s jewellery was thwarted.

At the hospital, Chelsea was visibly scared of Gray and asked for her mother Denise
(

As she was taken back home Gray began lashing out at her, calling her a gold digger and saying she didn’t even come close to Chantelle.

As Chelsea raised the alarm that something was wrong with the baby, he did not believe her until her waters broke.

At the hospital, Chelsea was visibly scared of Gray and asked for her mother Denise to be her birthing partner, but Denise, not knowing what had happened, refused, wanting Gray to be there for Chelsea and their child.

Eventually, Chelsea turned to Gray as she needed support during the worrying birth of her baby boy, and as he was rushed away to be given extra care she sobbed into Gray’s arms.

Gray was also crying and comforting his new wife, as they bonded in their joint fear that they could lose their child before they’d even gotten to hold him.

Later, Chelsea and Gray visited little Jordan in the baby unit where he was receiving special care.

Chelsea then apologised to Gray for trying to leave, blaming it on being overwhelmed – while failing to mention the messages or Chantelle.

It’s not clear if Gray knows about this, but he told her everything she wanted to hear as she prayed her “poorly” baby boy was going to be okay.

He kept telling her she was “amazing” and the “strongest person” he knows, while repeatedly telling her he loved her and their son.

Gray also confessed he feared ever losing either of them, before telling her that as a family they would get through it, and would forget what had happened before.

Chelsea then apologised to Gray for trying to leave, blaming it on being overwhelmed – while failing to mention the messages or Chantelle
(

But knowing Gray, he isn’t likely to forget her trying to flee, while it’s also not really clear if he genuinely loves his new wife given just months ago he wanted to be with Whitney.

Either way, his words appeared to win Chelsea over as she leant into him and accepted him comforting her.

Perhaps for their son’s sake she’s just putting a hold on all things comeuppance, or has Gray managed to talk her round back on to his side?

EastEnders spoiler: Phil Mitchell to go on the run after kidnapping son Raymond