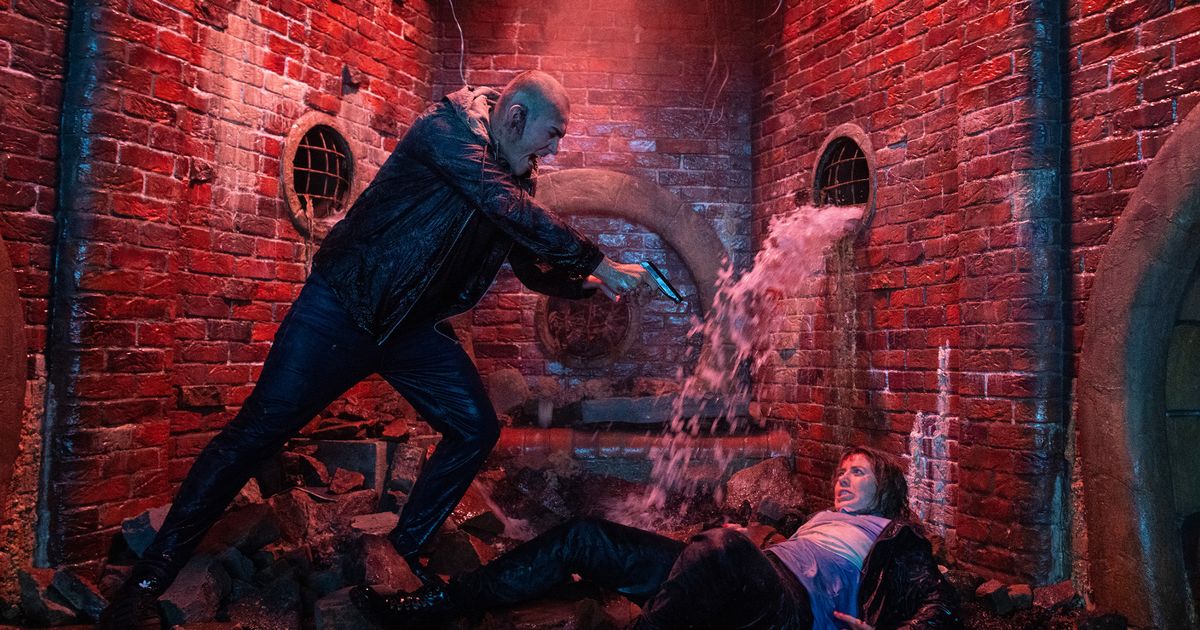 Coronation Street star Sally Carman has explained how she initially thought she wouldn’t be able to handle her character Abi Franklin’s showdown scenes with her son’s killer, Corey Brent

Actor Sally Carman has admitted her stunts for the Coronation Street ‘Super Soap Week’ were “terrifying” and she could only manage one take being trapped underwater as her character could die.

Next week Sally’s character Abi Franklin will take a gun onto the Street hoping to kill Corey Brent (played by Maximus Evans) who was responsible for the death of her own son Seb in an unprovoked attack.

But fate intervenes and the pair end up stuck together down a sinkhole with water rushing into it and the gun seemingly changing hands.

Sally, who wore a wetsuit in the scenes, said: “We started off on the Monday and finished on Sunday. By Tuesday I was like ‘I can’t do this’ It was so cold. Because we were permanently wet and it was so cold, but weirdly as the week went on. It’s like my body just to acclimatised.

“It was the very last day we did a drop through a trap door and stuff, and you kind of went through this trapdoor onto these piles and piles of cardboard boxes, and as soon as it was done, they went ‘CUT’ and I went ‘right I’m not doing that again’.

“It was brilliant, and luckily they got what they needed in that one shop because it was terrifying.

“There’s running gushing water coming out pipes and these electrical flashes, It was epic.”

Sally, 46, also told how her partner Joe Duttine who also appears in the soap, helped her relax after the stress of filming.

She said: “He is so good he always has tea prepared. And there was one night I was particularly freezing and I was like ‘I am so cold’ and I got in and he had laid out my pyjamas and my slippers and dressing gown and run me a big hot bath and put salts in it and made me a cup of tea.

Oh that was so sweet and yeah he’s brilliant.”

Next week also sees Harvey Gaskell, intent on murder, give chase as Leanne Battersby as she tries to escape

Soap producer Iain MacLeod has vowed that murderer Corey Brent’s story arc is far from over as the soap’s Super Soap week approaches – and also has confirmed one major soap character will die next week.

Corey recently escaped justice at the hands of the court system for the murder of Seb Franklin, with Kelly Neelan going to prison in his place.

MacLeod said: “This week, and the details of this week, have been in the pipeline for longer than even the sinkhole.

“It’s got loads of twists in it. It’s got some stuff in there which I think you’ll never see coming – which is, for my money, always the best thing in a soap or in any drama.”