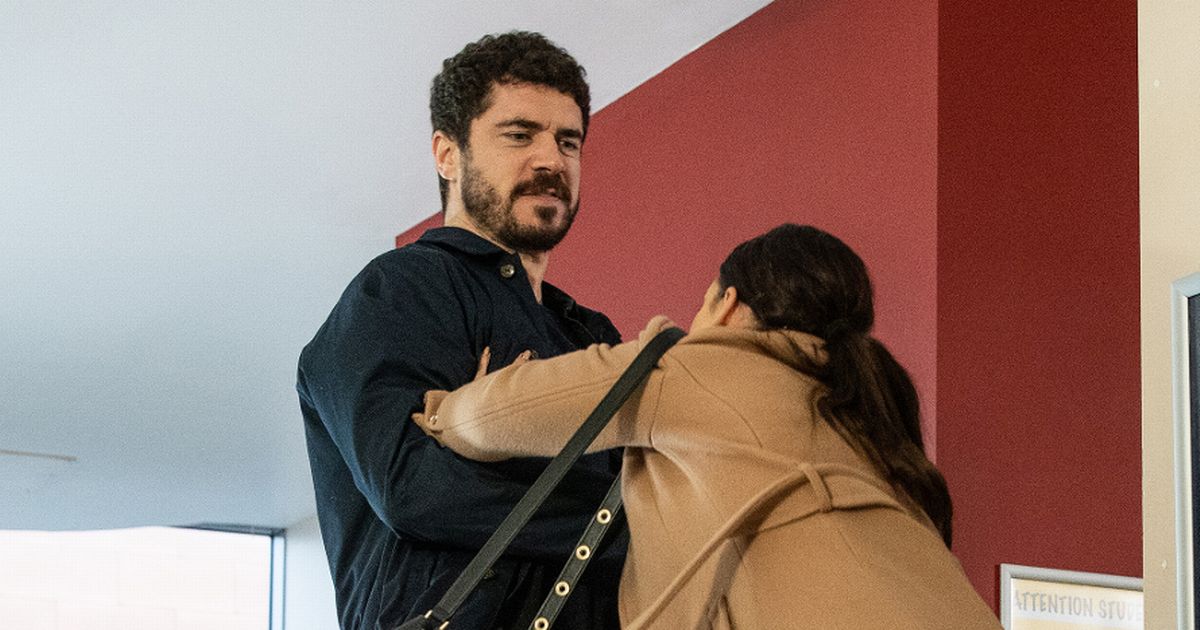 Coronation Street is headed for a tense showdown between Adam Barlow and Lydia Chambers on the ITV soap, which lands the lawyer on the operating table to save his sight

Coronation Street: Adam is arrested after Lydia frames him

Coronation Street’s Adam Barlow could dramatically lose his sight after Lydia Chambers pushes him in a horrifying fall as the pair face off in a tense showdown next week.

Lydia has successfully got her own back and set Adam up to make it look like they were rekindling their university romance in an illicit affair, resulting in Sarah kicking Adam out.

Lydia is n ow set to take aim at his professional life as she seems to be the obvious culprit of the malicious messages online about his conduct.

The soap will air the dramatic showdown later this month
(

ITV spoilers have now revealed the next worrying twist in ‘bunny boiler’ Lydia’s plot after landing Adam in hot water with the police.

The drama kicks off on Monday, March 21, when Sarah invites Adam to Harry’s birthday party, leaving him hoping that her decision to get a divorce is thawing – only for his good mood to shatter when she tells him she’s filed papers to end their marriage.

With Sarah distracted, Adam texts Lydia from her phone and later meets her in a coffee shop, hoping to entrap her.

But when he presses record on his phone to catch her confession, Lydia sees through his plan and snacthes his phone, pressing delete on the smoking gun evidence.

Adam is adamant he’s had enough of her games and tries to wrestle his phone back, but as Lydia lets go, the phone smashes to the floor.

Lydia rails at Adam for his treatment of her all those years ago and while he initially feels a pang of guilt, when he then suggests it’s time she told Sarah the truth, Lydia fumes.

Lydia realises it’s still the same old Adam and all he cares about is himself.

Meanwhile, Daniel scours the shopping centre for Adam, having heard from Sarah he’s gone to meet Lydia – but he hears a noise from the balcony.

In a rage, Lydia slaps Adam and gives him an almighty shove, only for Adam to topple backwards over the railings, while Lydia watches with horror.

The drama continues on Wednesday, March 23, when doctors tell Ken and Daniel that Adam has suffered a bleed behind the eye and needs an operation to save his sight.

As they quiz Adam about his fall, suggesting Lydia’s to blame, Adam claims he doesn’t remember.

Peter breaks the news to Sarah, who is cold and says Adam is no longer her problem, but Carla urges Sarah to be there for him when he wakes up as she clearly still cares about him. Will Adam be alright?