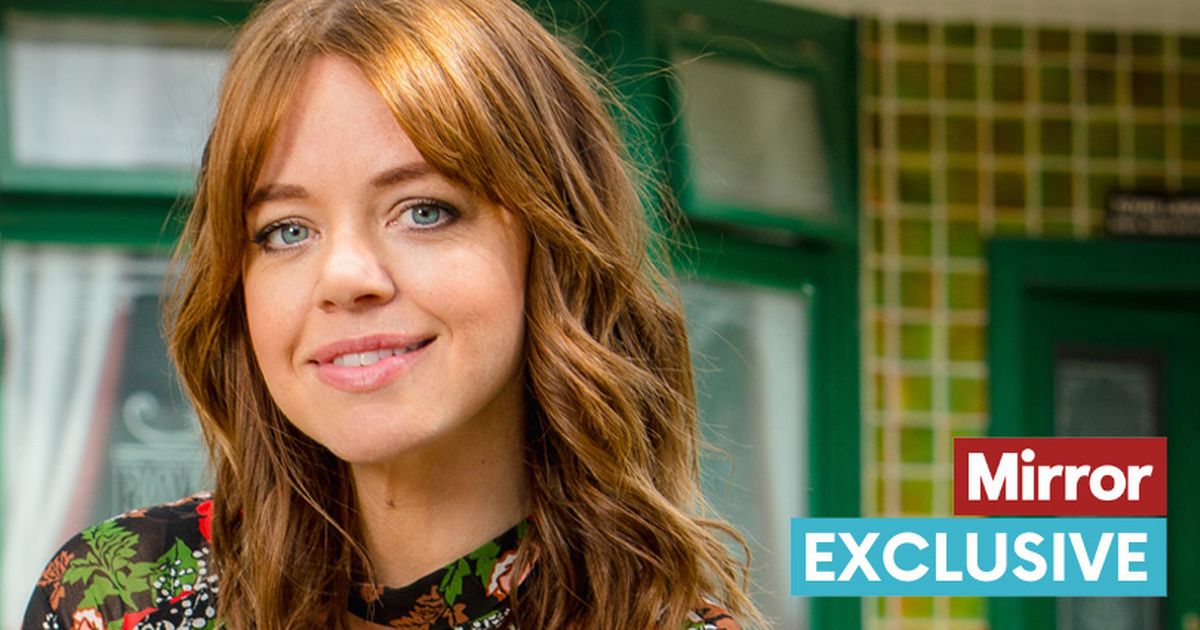 She first stepped out on the cobbles more than two decades ago as gobby teenager Toyah Battersby.

“Toyah came back to the street grown up and a very different woman from the one who left all those years ago,” says Georgia.

“She’s much more mellow now than she used to be – but there are flashes of the old Battersby in her coming out again. I’ve missed playing that fiery side to her – and I’m really happy we’re getting a bit of it back.”

Viewers will be glad to see it too, particularly after watching this week as lawyer Imran Habeeb, played by actor Charlie de Melo, confessed to playing away behind Toyah’s back in a drunken one-night stand.

What the love cheat didn’t reveal was that he hadn’t quite told the whole truth – and that the woman he’d slept with was grieving mum and Corrie favourite Abi Franklin, played by Sally Carman.

“I feel like Toyah has been there for everyone else over the past couple of years and it’s time for her to stand up for herself,” says Georgia, 41.

“I’ve been a bit desperate for this revelation to come out – the bit of it that Toyah knows anyway – and it looks like she’s finally reaching the end of her tether.

That Battersby fire is very much still in there. She’s never going to be that 16-year-old again, the one who would have gone in and trashed The Cabin, but I think a bit more Battersby attitude from her is definitely a good thing.”

After signing up with the soap back in 1997 aged just 17, Georgia was catapulted to stardom overnight as the youngest member of the unruly Battersby clan before she left five years later.

During 13 successful years away she made appearances in everything from Life on Mars to Midsomer Murders and had long-term roles on Casualty and Law & Order: UK – so a return to the full-on life of a soap star wasn’t something she was holding out for.

“Not at all,” says Georgia, who met actor partner Mark Letheren, 50, during her time on Casualty.

Georgia met husband Mark Letheren on the set of Casualty
(

“When my agent told me the call had come in Mark was in New York for work so the first person I spoke to was Jane Danson.

Ever since we started together as Toyah and Leanne we’ve been best friends, so when I got that call I texted Jane straight away. She was in Center Parcs with her family, bless her, but she was amazing and after speaking to her and dealing with the whole thing over Skype with Mark, I said yes.”

“And I’m so glad I did. It’s amazing being back and working with Jane has been brilliant. We film scenes together all day, and then we get home and speak to each other on the phone. She’s just the best person in the world.”

Now approaching the five year mark back on the Street – almost the same length of time she spent in Weatherfield first time round – Georgia reveals she recently signed up to the show for another year.

“I feel like there’s still a huge amount to do with the character and I’m very happy to be sticking around,” says the star, who grew up in Wigan.

“The first five and a half years felt like a lifetime. It was enormous. It was my first job, pretty much straight out of school, and it made such a big mark on my life.

It’s a weird thing to look back at myself at the beginning and I can’t believe how much we took it all in our stride, Jane and I, given how young we were and how well known we became so quickly.

“I don’t know that if it suddenly happened to me in the same way now I’d be able to do it, because in some ways I’m more introverted as an adult than I was as a teenager.

As a Corrie regular for many years, Georgia has been a household name since a teenager
(

Over the years, the actress has been involved in several dramatic storylines
(

“It’s that sense of walking into a shopping centre and feeling like everyone is looking at you. At 17 I thought of it as a novelty. It didn’t bother me at all, and if people wanted me to sign their magazine or whatever, that was fine. But back then there was no social media and there were no camera phones. It’s a different thing now.”

And while lots of soap stars are used to answering to their onscreen alter egos’ names when they’re out and about, for actress Georgia – who grew up as Claire Jackson – she reveals things are one step trickier for her.

“It’s not that I planned this to happen,” she laughs. “But when I started with Coronation Street I had to register with Equity, the actors’ union, and at the time there seemed to be a hell of a lot of Claires so I had to think of something else.”

“I couldn’t tell you where I got Georgia from, other than I liked it, but my grandad’s surname was Taylor and he passed away not long before I got the part.

As a teenager I didn’t really think the consequences through of opting for a completely different name, but it’s meant there’s been quite a bit of confusion over the years. At this point I’ll pretty much answer to anything!”

Still Claire on her passport and to her mum Caroline Jackson, the actress reveals about half the cast and crew at Corrie call her Claire, while the rest know her as Georgia.

“Basically when I started on Corrie the first time round I was still Claire,” says Georgia.

“It was a few weeks into the job before I was able to change my name so to everyone there at the time I was Claire Jackson, although I was Georgia Taylor in the credits. Then when I left in 2003 I went out into the world as a jobbing actress, and everyone called me Georgia.

“That was the case for years and years, and some of my very best friends call me Georgia.

I met Mark as Georgia. But back to Coronation Street five years ago and there were still loads of the cast and crew who’d known me before as Claire, so I was back to Claire again for them while the people I hadn’t known me before called me Georgia.

It’s pretty funny when I introduce myself to people. Anyone who recognises me from Corrie thinks of me as Toyah, and then I say ‘I’m Georgia, but I’m also Claire, so really call me whatever you like’.”

The on-screen sisters have some tense scenes together ahead

With plenty more twists and turns still to come for Toyah, Georgia is excited to find out what happens next for the character. And the drama is set to dial up a notch next week when viewers will see both Battersby sisters fighting for their lives when evil drugs gangster Harvey Gaskell escapes prison and returns to the street out for revenge.

“Harvey’s looking for both Leanne and Toyah,” reveals Georgia.

“Leanne put him behind bars and Toyah blew his appeal. He blames them for his downfall and he wants payback.”