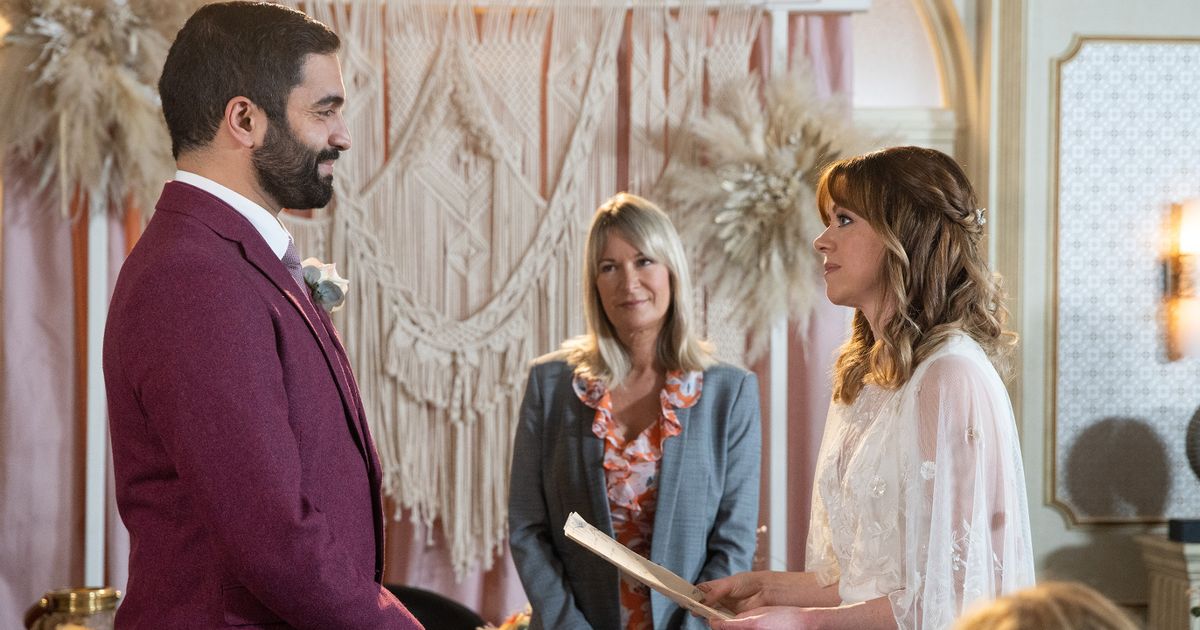 As with all soap weddings, it’s inevitable that drama will take centre stage as everything falls to pieces at the altar.

So Coronation Street fans can certainly expect Toyah and Imran’s big day to go up in flames as Abi realises what her baby daddy has been up to behind her back.

What is she planning to do?

Here’s what’s coming up on Corrie…

Abi Franklin faces the wrath of Imran Habeeb amid their bitter custody battle.

Imran is trying to get full custody of their baby son Alfie and stop Abi having access, after wrongly believing she is back on drugs.

He’s been playing dirty with tactics to show Abi is an unfit mother, and next week Abi makes a desperate decision.

Toyah has seemingly forgiven Imran for cheating on her with Abi and getting her pregnant, and is now rushing ahead with their wedding.

Next week is the big day, and Abi does everything she can to stop Toyah from marrying him amid his plan to take Alfie.

As Imran waits for his bride with a small group of wedding guests, Abi hijacks the wedding car just as Toyah gets into it.

Driving off, Abi tries to persuade Toyah to cancel the wedding and pleads with her to see she is making a mistake.

Abi eventually drops Toyah off at the hotel, and the bride walks in before going ahead with the ceremony.

As the wedding party piles into the Rovers, Imran confronts Abi in the street and asserts that she’s an unfit mother.

So will Toyah soon regret her decision to marry Imran, and what does it mean for Abi?

Faye will be in for a devastating shock as she receives an upsetting health diagnosis.

The character, aged 20, will be told she is suffering from early menopause by a doctor after recent health tests at the hospital.

Faye had thought she was pregnant, and after experiencing pains she feared she was having a miscarriage.

But Faye and partner Craig Tinker were stunned and confused to learn Faye had never been pregnant, and it was instead a false positive.

The doctors decided to run some tests to clear up what had caused the positive result, and why Faye had experienced pregnancy symptoms.

Since then, her and Craig decided to try for a baby despite Craig’s mum Beth telling her that her partner wasn’t ready for kids.

Next week, Faye attends a hospital appointment alone as she the results come back, and she learns devastating news.

At the medical centre, her doctor tells her she’s suffering from an early menopause and will never be able to have anymore children.

The character has a daughter named Miley who she welcomed when she was 15 years old, while she placed her up for adoption.

Faye is reeling over the news after her hopes to start a family soon with Craig, and she soon reveals the news to her father Tim.

An upset Faye later meets with Craig back at the flat, and tells him what she’s been told, and that she can’t carry anymore children.

Spoiler images show the moment an emotional Faye confirms the diagnosis, as Craig looks on in shock – but can he give her the support she needs?

In a devastating update, Craig admits to his girlfriend that he’s told his mum Beth the news – and her reaction isn’t nice at all.

Beth tells her son he should dump Faye because she can’t have his children, but what will his reaction be?

Max will be badly injured in a horror fall this week on the soap, in scenes to air on Friday.

After being exposed as the person who shared images of Nicky around the school, and it possibly also being revealed that he drugged Amy Barlow, Max tries to escape the street.

But his plans to flee the barbers and run away are thwarted when he cuts his leg on the broken window.

Max collapses in the street and it’s not been confirmed who finds him or what happens next.

However, new spoilers for next week on the soap do confirm Max survives his brush with death, while it seems he’s in a bad way initially.

Max has to undergo emergency surgery, and soon his dad David and stepmother Shona are assured by the surgeon that the operation has gone well and he’s in a stable condition.

Max admits that he was running away from home in a bid to avoid prison, after a devastating showdown with David earlier that day about his behaviour.

David is obviously relieved to see his son is doing okay, but there’s some worrying news ahead.

Later in the week, David visits Max and breaks the news that he’s been expelled from school after recent events.

But how will Max react, and will David find a way to help him?

It’s not clear what other trouble Max will face in the fallout to him being rumbled, with Amy’s uncle Daniel, Max’s teacher, desperate for him to face responsibility for what he did to both Amy and Nicky.

After initially finding herself in the good books of her new boss Mr Thorne, things take a turn in upcoming scenes.

It all kicks off when the character gets on the wrong side of her boss, when he believes she is making him look incompetent in front of a patient.

It isn’t clear what happens and what leads to Aggie possibly stepping in, but it does not go down well with Mr Thorne.

Instead, he confronts her about it and issues her with a verbal warning, leaving Aggie in shock.

But she’s later stunned when she makes a discovery about a neighbour’s recent operation, which was carried out by Thorne.

Coronation Street airs a discovery on the ITV soap next week, and Aggie Bailey finds herself caught up in the drama
(

She overhears him telling a colleague how he rushed Peter Barlow’s operation in order to win a bet – and not only that, but he is seen gloating about it.

Peter underwent a lifesaving liver transplant last year after his alcoholism relapse, but it appears the surgeon wasn’t exactly putting his health first.

Thorne is soon reported to the board for his actions, and it seems Aggie may be the one behind the complaint – while spoilers do not confirm this to be the case.

He certainly believes it was her though, and he wastes no time in threatening her.

Aggie tells a fellow nurse what has happened with Thorne, and that he has been reported – before she later discovers that all of his upcoming operations have been cancelled until further notice.

Mr Thorne soon accosts Aggie after believing she is behind the complaint, and he tells her that he plans to make her life a misery.

So will Peter find out the truth, and will Aggie tell someone about Thorne’s threats?

Viewers can see these scenes on screen all next week, while there is no doubt more to come for the storyline.