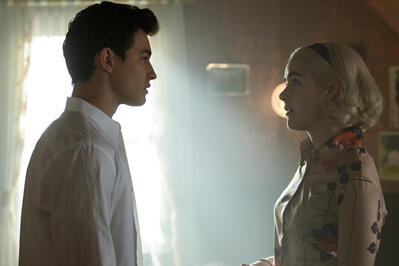 Sabrina Spellman (Kiernan Shipka) has her hands full when Chilling Adventures of Sabrina returns to Netflix on New Years Eve for the fourth and final installment of the Riverdale companion series. When we last saw the teenaged witch, she had split herself in two, potentially causing a paradox that could throw the entire time-space continuum into chaos while the Eldritch Terrors head to Greendale.

If that weren’t enough, Sabrina still needs time to do normal high school things like date boys and play in garage bands before the series takes its final bow. Chilling Adventures of Sabrina will end with Part 4, and even though the series finished filming before it was canceled, Shipka promises that fans will not be disappointed with the upcoming episodes.

“I’m bummed, as any fan of the show is, that we can’t give them more, because I would have loved to have done that. However, having said that, I do feel like the ending is satisfying,” the actress told TV Guide ahead of Part 4’s premiere. “I think we went into it knowing that it could very well be the end-end and the story wraps up in a way. Without giving too much away, some people are going to be happy. Some people aren’t, but I think everyone will feel like they got a satisfying ending, which personally, I’m very happy about. I think that our brilliant, wonderful, fans deserve nothing less than that.”

With the story wrapping up, it means that Sabrina may finally have to choose between her first love Harvey (Ross Lynch) and her other witchy half, Nick Scratch (Gavin Leatherwood). The latter pair ended Part 3 farther apart than they’ve ever been, but according to Leatherwood, there’s still reason to hope for reconciliation.

“At the end of Part 3, he’s sitting down on the steps, he’s sort of spent. He’s sitting there with Prudence, an old friend, and he kind of confides in her in an emotional moment. It’s not necessarily said, it’s more unsaid between them. But there is something there that’s like, ‘Okay, I’m ready to feel this. I’m ready to let go of the past and maybe move forward.’ In Part 4, we do see him move forward and try to get on with his life and get back to sort of the Nick that we [knew] in Part 1,” Leatherwood explained. “However, Nick had something happen [to him] that has forever changed him — and it was a taste of love from Sabrina. That will always be on the forefront of his mind and how to really live in a world without that is going to be his next big challenge.”

Shipka admits that things definitely need to change before Sabrina can give Nick another chance, but their breakup wasn’t about the fact that Sabrina doesn’t love him anymore. He still holds a dear place in her heart.

“I would say that she needs growth from him. He’s clearly in a phase that is just unsuitable for Sabrina,” Shipka said. “I mean, we have to take into account that Nick’s been on this earth longer and he has different issues. I think it was a matter of them not working together at that current moment. There was no sense of love lost. I think it was more of just ‘not the right place or the right time’ for them to be together.”

What’s New to Watch in December on Netflix, Hulu, Amazon, Disney+, and More

So should we be rooting for this troubled couple to kiss and make up? They have been through so much together, it would be a shame to see them throw in the towel. And we’re not the only ones who think so.

“They go to darker places, tougher places, as they mature and get older and learn how to handle the world,” Leatherwood added. “I think that there’s something really beautiful about remaining loyal through the tough times and sticking with each other through the good, the bad, and the ugly, so I’m rooting for them.”

The Chilling Adventures of Sabrina premieres Dec. 31 on Netflix.