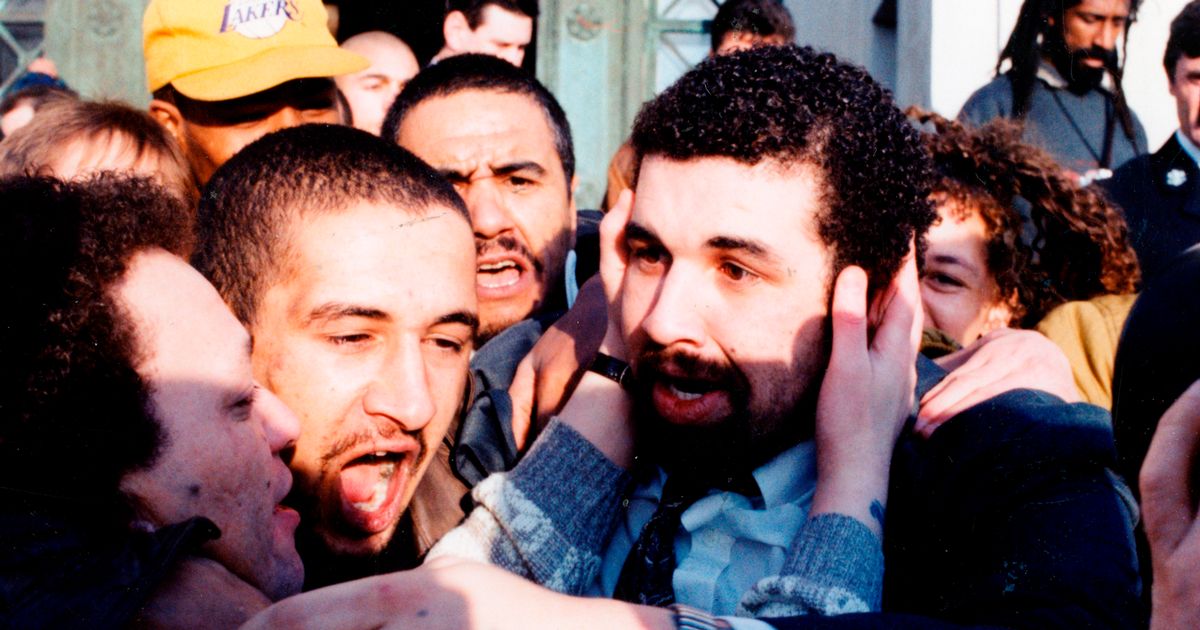 On Valentine’s Day 1988, 20-year-old Lynette White was brutally stabbed more than 70 times in a brothel above a betting shop.

The prime suspect seemed obvious – a sobbing white man with blood on his hands who was seen by four witnesses outside Butetown, then known as Tiger Bay, in the Cardiff Docks.

But in November that same year, police charged five black and mixed race men with White’s murder, despite there being no forensic evidence linking them to the crime scene.

The case, which the Home Office called “one of the worst miscarriages of justice in the history of our criminal justice system”, is depicted in new BBC six-part documentary A Killing in Tiger Bay.

Miller was 26 at the time but had the mental age of an 11-year-old, and he had been White’s boyfriend of two years.

Despite a solid alibi, he was arrested and interview by cops 19 times – falsely confessing to the killing after making 307 denials and implicating the other men.

He, Abdullahi and Paris, who became known as the Cardiff Three, were convicted of murdering White in a “ritual killing” and sentenced to life in prison, after what was at the time the longest murder trial in British history.

The Acties, who were cousins, were acquitted, but had already spent two long years in custody.

The Cardiff Three were acquitted in 1992 after it was determined the police had been coercive in their interviews and elicited a false confession from Miller.

The judge said the police had “bullied and hectored” Miller during a “travesty of an interview” and added that “short of physical violence, it is hard to conceive of a more hostile and intimidating approach by officers to a suspect.”

In 2003, fresh DNA techniques led investigators to the real killer – Jeffrey Gafoor – who pled guilty to killing White and was jailed for life.

An eventual trial against officers accused of fabricating the case, the largest of its kind in British history, would collapse due to missing paperwork which was said to have been shredded, though it was found just weeks after the trial ended.

But what happened to the ‘Cardiff Five’ after they were released?

Yusef Abdullahi was treated for post-traumatic stress disorder after his release from prison, and campaigned on behalf of other victims of miscarriages of justice and for the reopening of the investigation into White’s murder.

But he would end up collapsing from nervous exhaustion, waking up in a psychiatric bed and admitting he had been “really messed up” by his experience.

In 1996 he explained: “I was [in hospital] for several months and people keep telling me to take it easier.

“But the whole situation had got to me. I mean one minute I was in jail, the next I’m sitting eating with Bono. Until it happens to you, no-one can have any idea what it’s like to be convicted for a murder you didn’t commit.

“We’ve been really messed up by what we’ve been through. We needed counselling, but no-one offered us any help. Being inside really did my head in.”

Solicitor Matthew De Maid, whose firm represented Abdullahi during the Cardiff Five case, says his client struggled to move on from the horror he had experienced in being wrongly accused.

“He found it difficult to come to terms with life even after he was formally cleared.”

Tony Paris’ marriage broke down while he was in jail, and he would seek psychiatric treatment to help him cope

After his release from prison, Paris moved back to Butetown, Cardiff, which he says will always be his home, his parents having settled there when it was known as Tiger Bay – a multicultural district razed as part of a slum clearance in the 1960s.

“Living in the docks was brilliant,” he said in an interview with Jeremy Vine in 2016.

“I was brought up with all nationalities, all colours all religions. White boys, Black boys, Somali boys, Arab boys, Chinese boys, we didn’t see that, we were just docks boys.”

He spoke about how it felt to be wrongly accused in the same interview, admitting he could not even find the words to describe it.

“It’s the worst thing you can ever imagine,” he said.

“Emotionally, mentally there isn’t words to explain certain types of feelings when things happen to you.”

In 2011, he told The Independent that his marriage broke down while he was in prison and that he had to begin seeing a psychiatrist once a month.

“You don’t trust anyone, you don’t go anywhere, you’re a recluse,” said Paris.

“We’re left in limbo. It’s like watching a movie and when you get to the best part, it stops. You think it’s going to come back on – but it doesn’t. You’re stuck and there’s nothing that you can do.”

Now 51, Miller lives in London and refuses to ever return to Cardiff, because he cannot cope with the bad memories.

“I’m not sure if you’ve gone through somebody being killed. It’s not nice, especially when you have been accused of it.

“I won’t go back to Cardiff, never. Too many memories. Cardiff is where I used to see Lynette. It attacks my heart.”

Breaking down in tears, he added: “I couldn’t even protect Lynette. I should have protected her.

“What has haunted me for so long is could I have done more to have got her out of the situation she was in?”

In 2011, he told The Independent he could not work and avoids socialising due to the trauma he experienced.

“It nearly sent me crazy,” he said.

“The whole legal system has let me down from 1988. It’s been a nightmare from that day. They expect me to melt into the background. But for 23 years I have been fighting this case and I have thought about it every day.

“Everything has been on hold: friends, relations and family. For as long as I can breathe, I am going to be a thorn in their side.”

John Actie is now 60 and still lives in Butetown, Cardiff, but his false accusation would haunt him forever, with Actie reminded of the murder every time he walked past the shop – something he does regularly because of where he lives.

“My life hasn’t been normal for 30-odd years,” he told WalesOnline.

“It’s never going to be the same now even after all these years and the dust has settled. I was wronged, [the detectives] got away with it – I’m always going to be angry.

“The first couple of nights in jail I thought my cell door would open and they’d say: ‘There’s been a mistake John.’ But [the detectives] were at home – I don’t know how they could sleep at night.”

He also claimed he’d been attacked as a result of people believing him to be guilty, and was heartbroken when he visited Miller, Abdullahi and Paris in prison.

He would struggle to trust the police again, his stomach dropping any time he heard a police siren in the fear he was being wrongly arrested again.

Actie received £300,000 in compensation for the wrongful accusation.

In September 2007, 17 years after he was acquitted for White’s murder, Ronnie Actie was found dead in his back garden, aged 49, and police said there were no suspicious circumstances.

It transpired he had died from deep vein thrombosis, and had been “virtually living in a garden shed”.

His cousin John said at the time: “I’ve never recovered from what happened and I know Ronnie always found it difficult.

“I had a phone call to say Ronnie was dead but I don’t know what happened.”