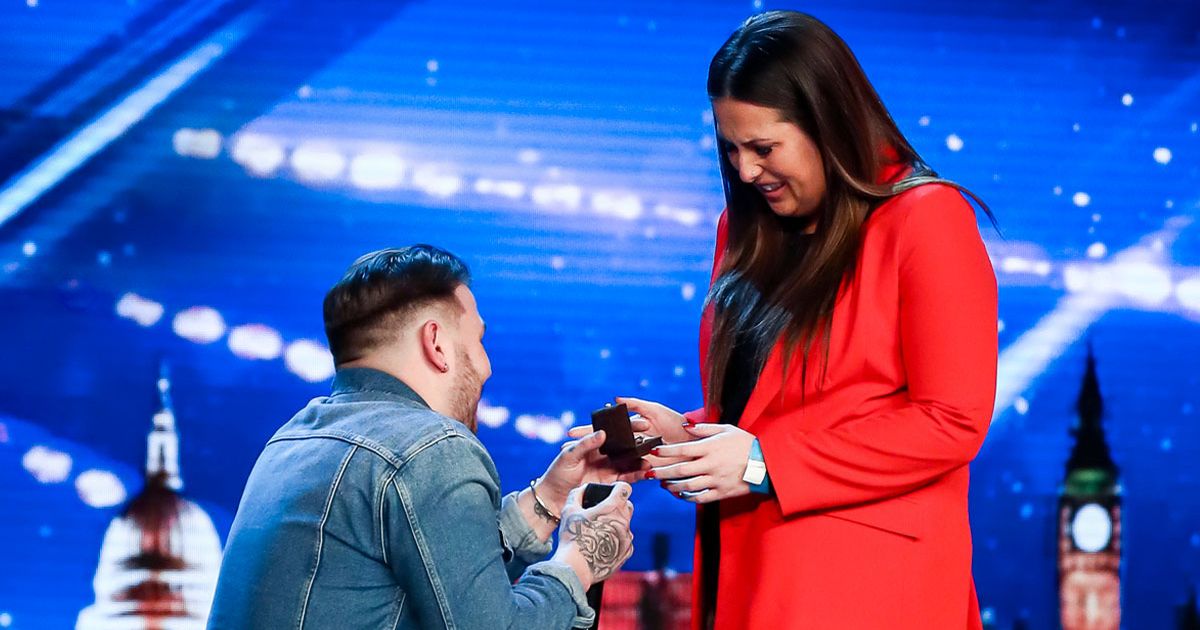 The heartwarming moment in 2019 left Simon Cowell in tears, as Britain’s Got Talent hopeful Jacob Jones got down on one knee and popped the question to Faye Compton

Britain’s Got Talent: Singer proposes to his girlfriend on stage

Britain’s Got Talent star Jacob Jones has married his fiancée after first proposing live on stage three years ago.

In a heartwarming moment that even reduced stony Simon Cowell to tears, Surrey native Jacob got down on one knee and popped the question to girlfriend Faye Compton in 2019.

The couple who created the ITV show’s first ever on-stage proposal have now officially wed at Cooling Castle Barn in Kent, with a honeymoon in Dubai planned.

Bride Faye said she had hoped to invite the Britain’s Got Talent judging panel of Simon, Alesha Dixon, Amanda Holden and David Walliams after they witnessed the special moment, but “but we didn’t know how to get in touch with them”.

Faye joked: “Hopefully Simon will still send us a gift. A trip to the Maldives would be lovely.”

After impressing the judges with his voice in 2019, BGT hopeful and father-of-one Jacob brought a shocked Faye onto the stage and proposed, leaving the audience cheering with delight when she said yes.

Faye told OK! Magazine of her shock at the moment, saying: “When Jacob invited me up on stage, I didn’t know which direction I was meant to be walking.

“David Walliams told me, ‘Up those stairs love’, and then when I said yes everyone began cheering. Even Simon got emotional.

“It was a mad moment that I’ll never get over. I don’t know how many times I’ve watched the clip at this point – it’s a lot!

The heartwarming moment even reduced stony Simon Cowell to tears
(

“Sometimes people ask me how I got engaged. When I start explaining they say, ‘Oh my God I remember you”’. It feels like everyone was a little part of it.”

Jacob and Faye share two kids, Nancy and Teddy, and the singer announced their second pregnancy on Britain’s Got Talent after performing Van Morrison’s Have I Told You Lately, which was their first dance song at the wedding.

Jacob said: “I got so wrapped up in the excitement of the show, and couldn’t help myself.

“I didn’t mind my experience on BGT ending after that night though. I’d already won the moment that Faye said yes to being my wife.”

“Hopefully Simon will still send us a gift. A trip to the Maldives would be lovely.”
(

While Britain’s Got Talent was off screens for all of 2021, the series has returned with a bang this year.

The judging panel as well as hosts Ant McPartlin and Declan Donnelly have already selected their Golden Buzzer acts, giving the contestants a pass straight to the live shows as they hope to be crowned the series winner.

The live semi-finals kick off on Monday, May 30 and will run across the week, with the 10 remaining acts through to the final, which will fall on the Jubilee bank holiday weekend.