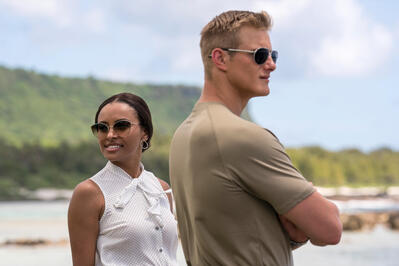 Looking for something new to watch on Netflix? You’ve come to the right place. Here are the best new shows and movies releasing on Netflix the week of Oct. 30-Nov. 5, 2020.

A good way to enrich one’s life is to go see the world. Climb the peaks of the Himalayas! Have some french fries in Paris! Do whatever there is to do in Canada! Lap up that foreign culture like you’ve never left your house before. Or, save a million dollars and stay at home to take in the culture of international programming, which you can do with this week’s new Netflix releases. There are a LOT OF international shows and movies coming out, and even the top domestic releases are about GTFOing America. And hey, maybe that’s a good thing because at the end of what might be the most important week in the history of the country, you may not even want to be reminded that America exists.

All titles debut on Friday, Oct. 30 unless otherwise noted. Here’s what came out on Netflix last week.

Somebody Feed Phil, Season 4
Phil Rosenthal created Everybody Loves Raymond, and no slight on that fine show, but if you ask me, his biggest impact on television is this wonderful travel and food show, in which Phil heads to foreign lands and eats a ton of great food. Rosenthal has no culinary background other than eating food daily, and that’s what makes Somebody Feed Phil so immensely watchable. He’s genuine, he loves food, he loves people, and he loves trying new things. And unlike most food show hosts who overact to trying a bite, Rosenthal’s reactions are so pure that you can taste them. This season, Phil heads to Rio de Janeiro, San Francisco, Singapore, and more.

His House
A pair of Sudanese refugees risk their lives for asylum in London and are put up in housing, but oops, the house not only has roaches, it is haunted. The British horror film has gotten good reviews, with many praising the leads’ performances. (Trailer)

Operation Christmas Drop
Kat Graham plays a no-nonsense congressional aide ordered by her boss to find reasons to defund a military base in the Pacific Islands over Christmas, but instead she finds a hunky officer (Alexander Ludwig) and the true meaning of Christmas that those fat cats in Washington will never understand. This Hallmarkian movie was filmed in Guam.

Bronx / Rogue City
This French film about cops and gangs in Marseilles features lots of people shooting at each other, and it’s so big it has two names. (Trailer)

The Day of the Lord
A priest has a real bad time when he tries to help his friend’s possessed daughter in this Mexican film. (Trailer)

Suburra, Season 3
The worst of the worst — corrupt politicians, crime kingpins, the Vatican — all butt heads as they try to gain control over a seaside town near Rome in this Italian crime thriller. This is the final season. (Trailer)

Mother
This dark Japanese drama film follows what happened between a controlling mother and her son to drive him to murder. A perfect movie to get in the mood for the holidays. (Trailer / Tuesday, Nov. 3)

Carmel: Who Killed Maria Marta?, Limited Series
This Argentinian true crime series investigates a case in which a woman was found dead at a country club and it was dismissed as an accident but then they also found bullets in her head? Something seems fishy here! (Trailer / Thursday, Nov. 5)

Paranormal, Season 1
If you’ve ever wondered if Egypt knew how to make horror shows about a science-first professor who starts to freak out when paranormal events happen to him, now’s your chance to find out. (Trailer / Thursday, Nov. 5)