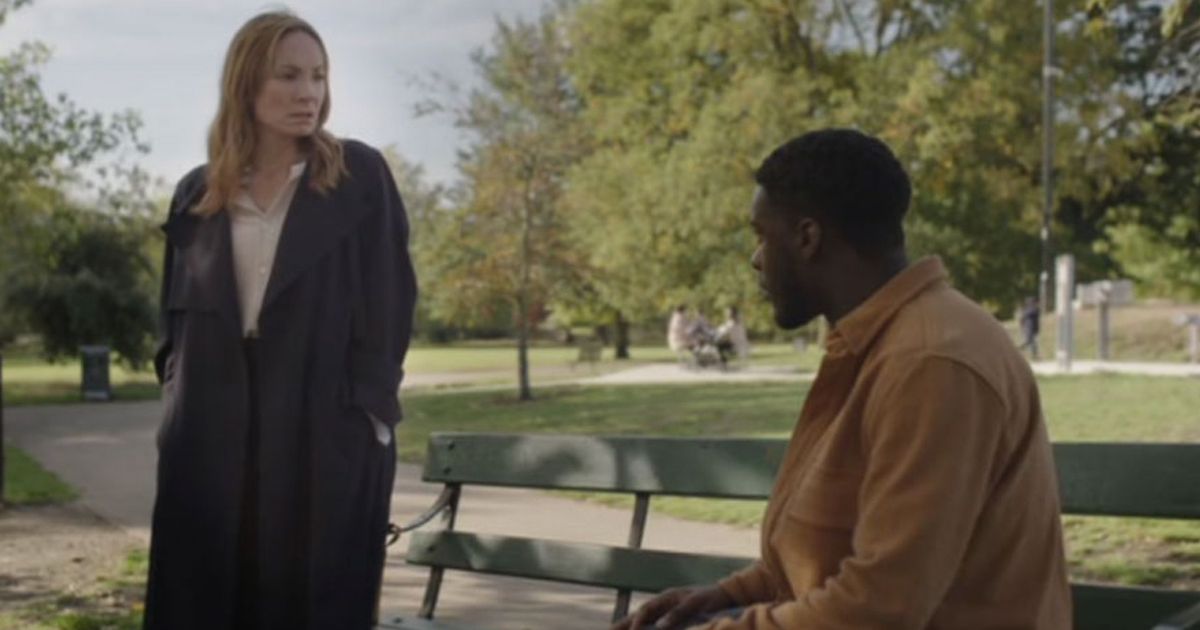 Angela Black: Ed warns Angela her husband is a murderer

Angela, played by actress Joanne Froggatt, is a victim of domestic abuse at the hands of her violent and manipulative husband Olivier.

On the outside, no one knows what she has been put through for a long time, with it revealed in the episode she has walked out on him before but she has never been able to leave him.

Viewers were uncomfortable, with violent scenes from the very start, as Olivier brutally beat her before manipulating her into stay with him – using their children against her.

What she was soon told though after a stranger approached her, was that Olivier is apparently trying to get a divorce in secret, wanting sole custody of their two sons.

Olivier has apparently hired Ed to follow his wife and dig up dirt on her, to set her up amid his divorce plans.

But events took a sinister turn, when Ed turned up at her house and claimed things had escalated, and Olivier now wanted Ed to murder her.

Ed turned up at her house and claimed things had escalated, and Olivier now wanted Ed to murder her
(

Angela refused to believe Ed who was begging for her to listen and take action, claiming her husband wanted him to kill her soon.

She believed her husband could never kill someone despite his abusive ways, to which Ed reminded her of a colleague of Olivier’s who vanished out of the blue recently.

Ed revealed that the woman in question had been having an affair with Olivier, and that she mysteriously vanished after telling Olivier she was going to expose their romance.

He claimed Olivier actually told him he’d murdered the woman, something Angela was left reeling by – but she still didn’t believe Ed’s claims after he showed up at the back of her house without warning.

Ed begged her to check Olivier’s briefcase and told her his number was in there, advising her to call him as he wanted to help.

But Angela wasn’t the only one suspicious of Ed and his recent meet-ups with her, with viewers taking to Twitter to share their own theories.

Many came up with a devastating idea that a twist was on the way, and perhaps Ed didn’t actually exist.

They noticed that despite his claims about Olivier, no one else had seemingly seen or interacted with Ed in the first episode.

Many began questioning if Ed was made up in her head, and her way of coping with the abuse – as others were more convinced Ed could be setting her up, and getting her on side just to let her down.

One viewer wrote: “Yep I’m convinced that this fella doesn’t really exist,” as another agreed: “Is she imagining this Ed bloke, cos she’s the only one who’s seeing him so far.”

A third added: “Ed isn’t real she’s made him up to cope with the trauma. That’s why he can’t follow the husband.”

Meanwhile on the latter theory, one fan questioned: “Ed could be the psychopath making it all up.”

Another wrote: “It’s going to be a double bluff isn’t it? The guy trying to ‘help’ her will be setting her up & gathering evidence that she’s plotting to kill her husband… Maybe he’ll kill him as revenge for something but she’ll get the blame. Sorted.”

A third commented: “I believe the husband has invested in Ed to mess with Angela’s head. Narcissist.”