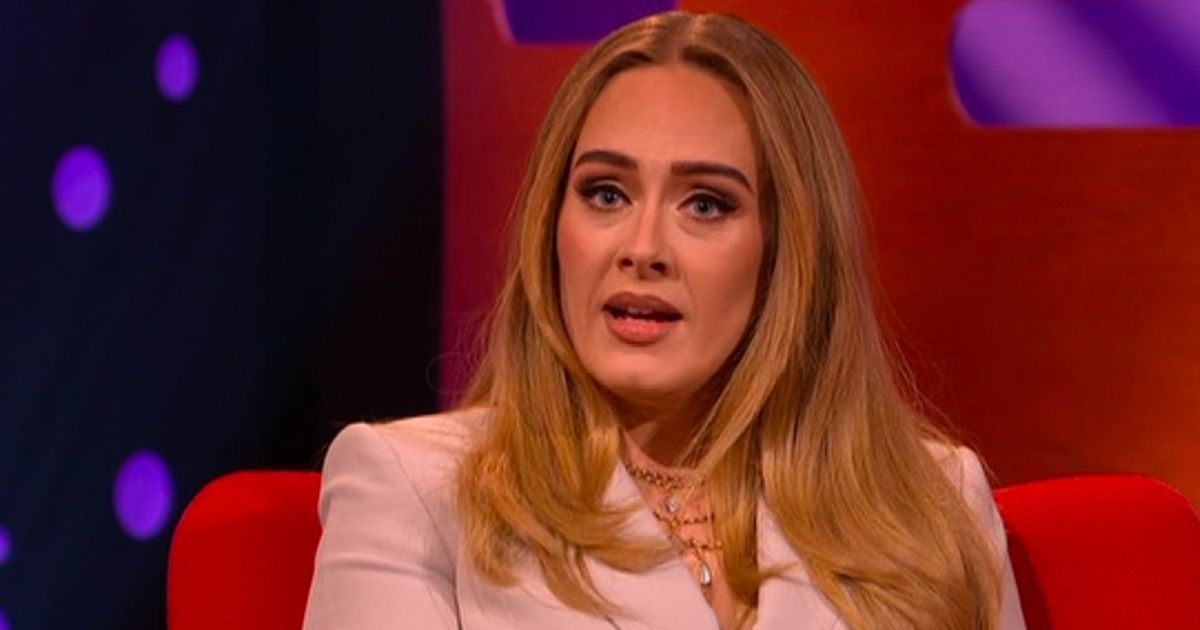 Singing sensation Adele delighted Graham Norton viewers as she got candid about her love life, her cancelled Las Vegas shows, and her three BRIT Award wins

Adele jokes about her engagement ring

Adele sparked commotion following her appearance on The Graham Norton Show tonight after she insisted that she will never confirm her rumoured engagement.

The 33-year-old music icon looked sensational as she modelled a grey tailored suit which did wonders to accentuate her amazing weight loss transformation.

The blonde beauty wore her golden locks in a sleek straight style and she opted for her signature vintage-inspired makeup-look, complete with a nude lip and some glamorous false eyelashes.

Fresh from her spine-tingling BRIT Awards performance – where she scooped three gongs on the special night – Adele beamed as she took to the famous red chair to chat to Irish-born host Graham.

The star was soon quizzed about the huge sparkler on her ring finger by Graham.

Adele says she will never confirm if she’s engaged
(

Adele had first debuted the glorious diamond ring on Tuesday night at the BRIT’s, but she had yet to address the rumours that her new beau Rich Paul had popped the question – that was until Graham grilled her.

In response, a coy Adele insisted that she has no intentions of sharing her relationship status.

“I’ll never say if I am or am not engaged,” the star giggled.

In response, Graham joked: “Well, it sure looks like you’re engaged.”

To which Adele giggled: “Alright then.”

After Adele finished filming her Graham Norton appearance, the Tottenham-born singer made the most of her night out as she hit London’s biggest nightclub, Heaven, where she showed off her pole-dancing skills.

Adele was one of the many fans in attendance at the event and was filmed loving life throughout the competition.

She then decided to get involved and took to a pole to dance in a white outfit.

The audience cheered her on as she decided she wanted to be closer to the action after she had watched the weekly show in the VIP section at the side of the stage.

An onlooker at the club told Daily Star : “Adele was absolutely loving the event. She was having a great time with friends and loved watching the show.

“After the contest was over she stormed the stage and the crowd went wild. No one was expecting a music icon to be there.”

It comes after she had appeared at the BRIT Awards on Tuesday and took home three gongs, winning Artist of the Year, Album of the Year and Song of the Year.

During her acceptance speech show caused controversy after appearing to take issue with the Artist of the Year award being gender neutral.

Shortly after, she reflected on the ceremony in a post to her 49 million followers on Instagram and paid tribute to organisers as well as those nominated for awards.

Alongside a series of snaps she wrote: “What a night! Thank you @brits, thank you Sally and Tom for being so accommodating.

“Thank you to everyone who was there in the crowd, you were so loud and loving. Congratulations to all the other winners and nominees. Keep smashing it.”

The Graham Norton Show continues next Friday at 10.35PM on BBC One.