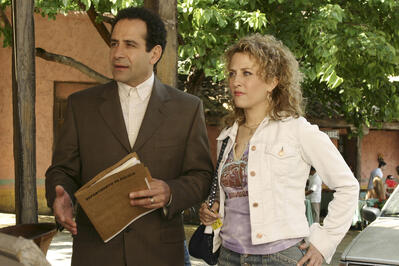 Monk was right: It’s a jungle out there. And if you’ve spent the past few months watching each and every one of Monk‘s 125 episodes with a dedication that would make the good detective proud, the only thing scarier than the outside world might be figuring out what to watch next.

The USA Network procedural has been a soothing (if sometimes too real) rewatch in the midst of a global pandemic, which has a lot of us pointing at Adrian Monk (Tony Shalhoub) and his supply of hand-sanitizing wipes and saying, “I do that.” But Monk isn’t the only TV detective with a knack for cracking impossible cases while annoying everyone in the room. TV Guide has rounded up some of the best character-driven crime shows to fill that Monk-shaped hole in your life, from long-running classics to underappreciated gems.

Where to watch: Amazon, NBC.com

If you like Monk best when he’s cranky, check out House. The long-running Fox medical drama is a hospital whodunit where catching the “killer” means figuring out what’s wrong with the patient (and it’s never lupus, except for the one time it is). It’s a smart twist on the usual mystery show formula, and Hugh Laurie — as the brilliant but abrasive Dr. Gregory House — makes it unmissable. Like Monk, House is a modern homage to Sherlock Holmes, from his sharp deductive skills to his drug use. Come to watch Hugh Laurie mock people while diagnosing strange ailments, stay for the Holmes-and-Watson relationship between House and his one true friend, Wilson (Robert Sean Leonard).

Where to watch: Hulu, Amazon

OK, let’s clear this up: She’s Bones. And it’s a nickname. Because she works with bones. Temperance Brennan (Emily Deschanel), a world-renowned forensic anthropologist who solves crime using bones and writes best-selling crime novels on the side, is the Monk of the Bones world (women’s rights!), a socially awkward genius with a tragic past who can be difficult and exacting but always gets results. Brennan and her team of scientists work with FBI Special Agent Seeley Booth (David Boreanaz) to catch murderers in cases that range from quirky to “this time it’s personal.” The cases are fun, but they aren’t usually as hard to crack as Monk‘s; the real selling point of Bones is the electric chemistry between Deschanel and Boreanaz.

Monk’s phobias are often played for laughs, but at his core he’s a very sad man. If you’re looking to watch another sad man solve crimes, check out HBO’s new take on Perry Mason, starring Matthew Rhys, the best sad man on television. This Perry Mason, set in 1930s Los Angeles, dreams up a gritty origin story for the famed defense lawyer, who spends the first season mostly focused on solving one gruesome case — and facing his own demons, obviously. There are lags in the storytelling, but the characters are well drawn and the vibe is appealingly noir. And Matthew Rhys is just so good at being sad.

For more noir detective stories, this time with bonus teen drama, watch Veronica Mars. The UPN-turned-CW series stars Kristen Bell as a high schooler, and eventual college student, who moonlights as a private eye, taking on cases for her classmates and her detective father (Enrico Colantoni) while also unraveling season-long mysteries. The one that looms largest is the murder of her best friend, Lilly Kane (Amanda Seyfried). If you’re looking for an intricate crime drama that demands more attention than Monk, Veronica Mars is the perfect marathon — at least for the first two seasons. The frustrating Hulu revival is best ignored, and even the third season lost some magic, but the early years of Veronica Mars are unforgettable: a smart, dark exploration of trauma and privilege in a town where the haves and the have-nots are at each other’s throats.

Where to watch: Peacock, Amazon

There was a time when a Monk and Psych crossover would have been like assembling the Avengers for USA Network fans. A crossover never happened (all we got were these promos), but if you miss Monk‘s upbeat “characters welcome” charm and still haven’t watched Psych, let this be your signal from the blue sky heavens. The cult favorite show follows irreverent charmer Shawn Spencer (James Roday Rodriguez) as he bluffs his way into a gig as a fake psychic detective using his keen observational skills. Alongside his best friend, Gus (Dulé Hill), Shawn wins over the Santa Barbara Police Department, including his love interest, Juliet O’Hara (Maggie Lawson), and gruff head detective Carlton Lassiter (Timothy Omundson). Psych is Monk with even more laughs, obscure pop culture references, and running gags about pineapples.

Everyone should love at least one gone-too-soon network drama. It keeps you humble. And you could do a lot worse than ABC’s Stumptown, which was unexpectedly canceled due to COVID-19 production delays after previously being renewed for a second season. The Portland-set show, based on the comic book series of the same name, stars Cobie Smulders as private investigator Dex Parios, a Marine veteran with PTSD and gambling debt who’s also trying to support her brother (Cole Sibus). Dex, a messy, smart-alecky bisexual woman, is a cool spin on TV’s typical troubled detective, and Smulders is highly watchable in the role. The fact that the ensemble is packed with favorites like Jake Johnson and Michael Ealy only makes Stumptown sweeter.

Sometimes you want to watch a difficult genius inspired by Sherlock Holmes, and sometimes you want to watch Sherlock Holmes. The best of the recent wave of Arthur Conan Doyle adaptations is Elementary, which stars Jonny Lee Miller as a modern Sherlock who lives in New York City and Lucy Liu as Dr. Joan Watson, a former surgeon hired as his sober companion. It’s a sharp, well-made series with an exciting cast (stay tuned for Natalie Dormer), and it weaves in surprising new twists on the Sherlock Holmes canon while still delivering all the usual comforts of a network procedural. Plus, Liu’s wardrobe as Joan is to die for.

This one isn’t a detective show, but it is an underrated gem featuring Tony Shalhoub as a senator whose brain has been eaten by alien bugs. Between The Good Wife and The Good Fight, super-creators Robert and Michelle King created BrainDead, a one-season wonder about a documentary filmmaker (Mary Elizabeth Winstead) who takes a job working for her senator brother (Danny Pino) and discovers that Washington, D.C., has been invaded by extraterrestrial bugs, which have taken control of some members of Congress. Very few people have noticed a difference. It’s a charmingly weird political satire with a sci-fi streak, and it’s a fun watch if you want to see Shalhoub in a new light. Monk would not do well with those bugs.

Where to watch: IMDb TV (free with ads)

Just one more thing — brush up on your TV detective history with Columbo. The classic procedural aired on NBC from 1968 to 1978 and then returned less frequently on ABC from 1989 to 2003. The legendary Peter Falk stars as Lieutenant Columbo, a clever, rumpled homicide detective who, like Monk, is perpetually underestimated by killers. Some of the best Monk episodes follow the Columbo model: The episode starts by revealing who did it, and the mystery is how our hero will prove it, which he always does. Check it out for the satisfaction of watching egotistical murderers get what’s coming to them.