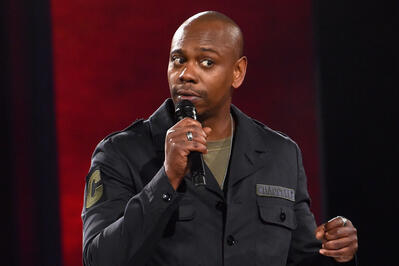 We were so happy to bid farewell to 2020, but it seems like the new year has some of that leftover energy. If you follow the news even a little bit, there’s a lot of upsetting information coming at you: coronavirus, the second impeachment of a U.S. President, and the continuing struggle for social justice in the Black community. One good way to keep up on what’s happening is through the lens of comedy. Happily, there are plenty of comedy specials to watch whether it’s to keep you company or put on in the background when you’re working.

Of course, as we continue to watch the biggest civil rights movement in history play out in real time, lots of us are also looking for ways to learn more about it and about Black history in general. While there’s plenty to watch that explains disparities in criminal justice and other important topics, it’s important to remember that there is far more to the Black experience than struggle and hardship; the Black experience includes joy and laughter too, even in the face of difficulty. If you could use a laugh right now (raise you’re hand along with us) without sacrificing awareness of what’s happening in the world, check out any of these standup specials from Black comics who talk about race while making you laugh.

1. Richard Pryor: Live in Concert (1979, Netflix)
No conversation about Black comedians — or comedians period — is valid without paying homage to the GOAT, and in this classic special, available on Netflix, the comedy legend covers everything from race and the police to his immense stardom. (Plus drugs and sex, too.)

2. Dave Chappelle: Killin’ Them Softly (2000, HBO)
Is Dave Chappelle the rightful heir to Richard Pryor’s throne? Is this particular special Dave’s finest? Is this special even his most thoughtful about race? These are all questions you can answer for yourself, but race and racism are almost always part of his work; whether you like what he has to say or not, he leaves you with something to think about, and some deep belly laughs. Or course, he has many other specials you can check out including Dave Chappelle: Equanimity & The Bird Revelation on Netflix.

3. Def Comedy Jam 25 (2017, Netflix)
Cedric the Entertainer, Sheryl Underwood, Steve Harvey, and more take on pretty much everything in this tribute to the pioneering HBO series, exposing viewers to a wide breadth of perspectives on life — including race and racial identity. By the way, it’s never a bad idea to check out the original series, either, also available on HBO.

4. Gina Yashere: Laughing to America (2013, Netflix)
British, Black, and a second-generation Nigerian woman, Bob Hearts Abishola star Yashere shares jokes rooted in her experience being from a multi-cultural background and how she adjusted moving to the United States.

5. Hannibal Buress: Comedy Camisado (2016, Netflix)
While most of this special isn’t about race at all, it does deal with Burress’ feelings about his role in bringing down Bill Cosby (he joked in 2014 about the many sexual assault allegations against Cosby, sparking the fire that brought Cosby to justice) and the hypocrisy of Cosby’s respectability politics. For that alone, Burress’ routine illuminates varying stances between Black thinkers and people of different generations, blasting away at the mythology that Black people are a monolith.

6. Trevor Noah: Afraid of the Dark (2017, Netflix)
The South African born performer, who was literally born a crime due to apartheid, shares a unique and important perspective on life (and racism) in the United States.

7. Yvonne Orji: Momma, I Made It! (2020, HBO)
The Insecure star’s first stand-up special deals a lot with her experiences as a second-generation Nigerian black woman, among other topics.

8. Total Blackout: The Tamborine Extended Cut (2021, Netflix)  – In this recut version of Rock’s 2018 comedy special, there’s 40 minutes of additional material, and in an interesting change, Rock’s name is now listed as the director of the special, replacing Bo Burnham, who directed the first version of Tamborine. In addition to social issues, Rock leaves his comfort zone and talks about his personal life, the infidelities that led to his divorce, and it shows a more vulnerable side of the wickedly smart artist.  Total Blackout shows us a more mature and even more thoughtful and introspective Chris Rock.