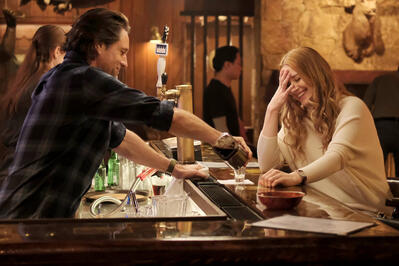 Hopeless romantics fave fallen head over heels for Netflix’s romantic drama Virgin River, and rightfully so. The series is an adaptation of a book series by author Robyn Carr and has shades of a Hallmark movie (in a good way!), so it’s great for fans of romance novels. But if you’ve already watched all of Season 2 — and you have, haven’t you? — what should you watch while you wait for Season 3?

Virgin River stars Alexandra Breckenridge as Mel, a midwife and nurse practitioner from Los Angeles who packs up her life to move to a picturesque but remote Northern California town after a series of traumatic heartbreaks. As Mel attempts to settle into her new life and move on from the past, her life is further complicated by Doc Mullins (Tim Matheson), who doesn’t want her help despite her medical expertise, and Jack (Martin Henderson), a friendly (and hunky) local bartender who dares her to open her heart to love once more.

The Netflix series hasn’t been renewed for a third season yet, but we’re holding out hope. In the meantime, we’ve curated a perfect recommendation list featuring TV shows like Virgin River that capture the same spirit of the part-romance, part-medical drama. These are the series you should watch while waiting for Virgin River Season 3.

10 Shows You Should Watch if You Like Hart of Dixie

The first stop for Virgin River fans has to be Netflix’s Sweet Magnolias, which is based on a series of romance novels by Sherryl Woods. Joanna Garcia Swisher stars in the Southern-set series as Maddie, a soon-to-be divorced mom of three attempting to pick up the pieces of her once picture-perfect life after her cheating husband (Chris Klein) leaves her for the younger woman (Jamie Lynn Spears) he got pregnant. As Maddie struggles to deal with the fallout under the scrutinizing stares of a small town, she’s also raising her kids and managing a new business with her best friends, Helen (Heather Headley) and Dana Sue (Brooke Elliott). But the real hook — and what fans of Virgin River will love — is the swoon-worthy romance between Maddie and her son’s sexy new baseball coach, a former Major Leaguer (Justin Bruening).

If you’re looking for heart-stopping romance and all that it entails, look no further than Starz’s Outlander. The show stars Caitriona Balfe as Claire Randall, a married former WWII nurse who travels back in time from 1945 to 1743 while on vacation with her husband (Tobias Menzies) and ends up falling in love with a rugged Highlander named Jamie Fraser (Sam Heughan). Like Mel, Claire uses her medical knowledge and training to help those in need, but the real draw of this historical drama is the love affair between Claire and Jamie, which is one for the ages.

The CW dramedy Hart of Dixie is the funnier, goofier sibling of Virgin River. The two shows have a shocking number of things in common: (1) the lead character (Rachel Bilson) is a medical professional who (2) relocates to a small town where (3) the local doctor has no use for her — and (4) the doctor is even played by the same person (Tim Matheson) in both shows! Throw in (5) a hot bartender (Wilson Bethel) as a love interest, and you’ve got a show eerily similar to that of Virgin River. Of course, Hart of Dixie also features a pet alligator named Burt Reynolds, a lot of wacky town festivals, a love triangle that also includes the town lawyer (Scott Porter), and a complicated relationship between its leading lady and a Southern Belle (Jamie King). But if you love Virgin River, there’s no doubt in my mind you’ll also love Hart of Dixie and the town of Bluebell, Alabama.

Watch it on: Hallmark Movies Now

Like Netflix’s Sweet Magnolias, Hallmark Channel’s drama series Chesapeake Shores is also based on a series of novels by author Sherryl Woods. The show stars Meghan Ory as Abby, a divorced mother of two daughters who returns to her hometown of Chesapeake Shores, Maryland, to help save her younger sister’s inn from foreclosure. But there’s more waiting for her, including a second chance with her first love, Trace (Jesse Metcalfe), whom she’d left years ago to move to New York. Virgin River fans are sure to fall in love with this one.

Although the romantic nature of Virgin River is what initially draws in many viewers, the show’s medical storylines and Mel’s skills as a midwife also add a great deal of drama and heartache to the narrative. So if you’re looking for another series set in the medical world that isn’t just another Grey’s Anatomy knock-off, we recommend the BBC period drama Call the Midwife. The long-running series, which skillfully weaves discussions of social, cultural, and economic issues into its storylines, follows the day-to-day lives of midwives in London circa the 1950s and ’60s, and some aspect of love is explored in each episode.

If you like the small-town atmosphere of Virgin River and the theme of starting fresh, you might be interested in the Canadian family drama Northern Rescue, which follows a search and rescue commander played by Billy Baldwin who relocates his family from Boston to his small hometown of Turtle Island Bay following the unexpected death of his wife. Although the family is hoping to live a slower life and find a place they can heal and start over, new challenges arise as soon as they arrive in the small town, and their troubles grow as secrets are revealed. There’s only been one season so far, and it’s unclear if the show, which debuted in spring 2019, will be back. But if you’re looking for a quick watch, Northern Rescue is a good choice.

Watch it on: IMDb TV

I don’t know what it is about medical professionals starting over in small towns, but if that’s your thing (and based on the number of shows out there with this exact premise, it’s definitely someone’s thing), it is also the basis of the heartwarming family drama Everwood. Treat Williams stars as renowned surgeon but absent father Andy Brown, who, following the sudden death of his wife (Brenda Strong), packs up his teenage son, Ephram (Gregory Smith), and pre-teen daughter, Delia (Vivien Cardone), and moves from New York City to Everwood, Colorado, in an attempt to rebuild his life and reconnect with his children. Fair warning: The heartfelt WB series created by Greg Berlanti will make you cry, but you’ll love the small town charm of Everwood, the family drama of the Browns as they attempt to pick up the pieces and reconnect with one another, and, of course, the romantic escapades that come with it all.

Based on a book series, Heartland is the show you want to watch if you like Virgin River and are looking for a series you can really disappear into. To date, the Canadian drama, which details the highs and lows of ranch life and follows Amy (Amber Marshall), a young woman with the ability to heal damaged horses, has aired 13 seasons (11 of which are currently on Netflix). The heartfelt family drama, like some of the others on this list, sadly kicks off with the death of a parent: a storm in the series premiere sends Amy’s mother’s truck and horse trailer off the road. Amy is seriously injured as well, and as a result, her older sister, Lou (Michelle Morgan), returns home from the city to help her and their grandfather (Shaun Johnston) with the family’s ranch. A fourteenth season has already been ordered, so if you need something to sustain you for a bit, this is definitely it!