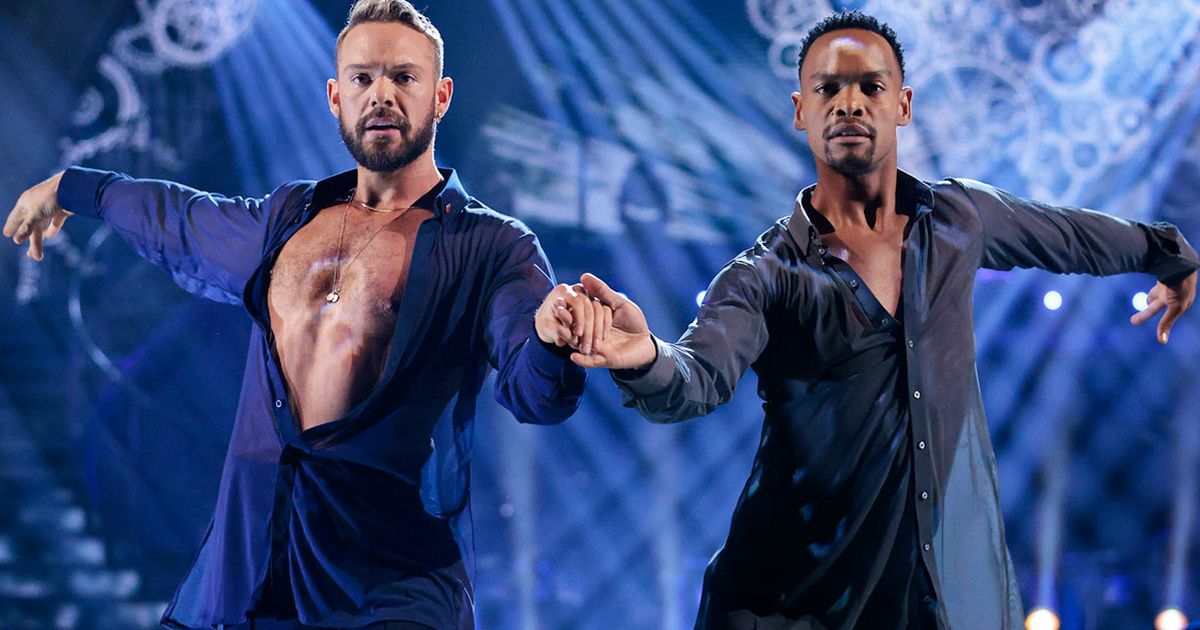 Former Great British Bake Off winner John Whaite is competing against EastEnders star Rose Ayling-Ellis in the live final tonight, after fellow celeb AJ Odudu was forced to drop out after suffering an injury

Strictly: John and Johannes reveal what winning would mean

Strictly Come Dancing ‘s John Whaite has shared an intimate snap with pro partner Johannes Radebe ahead of the live final on Saturday.

The former Great British Bake Off winner is competing against EastEnders star Rose Ayling-Ellis and her professional dance partner Giovanni Pernice in the eagerly-awaited big showstopping finale on BBC One.

John and Johannes, who are the first-ever all-male couple on the dancing competition, are set to perform their stunning rumba in the final, as well as their Pirates of the Caribbean-inspired paso doble, and their show dance.

Ahead of performing their three final routines, John took to Instagram to share a touching shot of himself and Johannes dancing the rumba, which was praised by the judges when they debuted the dance in November.

“One last time. Just me and you @johannesradebe,” the 32-year-old wrote.

“Whatever happens tonight you are winners,” one emotional fan commented on the snap.

“Dignified and courageous. I see you and love watching you dance. Champs both of you already,” another added, while one follower wrote: “Whatever the outcome you will always be winners in my eyes.”

John said he cried when they first began rehearsing the routine
(

John and Johannes are Strictly’s first ever all-male couple
(

John and Johannes moved judge Shirley Ballas to tears when they performed the rumba in week seven, and their touching routine was set to the heartbreaking tune of Sting’s Shape Of My Heart.

“The fact that you stripped down the whole rumba and made it more pure and kept it so simple was so fitting for both of you… all in all, it was class personified,” Shirley told the couple following the routine, as she said she was ‘very moved’ and ‘quite emotional’.

While Craig Revel Horwood said he was going to steal their dance and perform it at his wedding to fiancé Jonathan.

John shared the intimate snap on Instagram, just hours ahead of the live final

“I thought it was absolutely gorgeous, I really, really did,” he admitted.

Motsi Mabuse said the duo made her feel like there was ‘just the two of you and me in this room’, and praised them for the pouring every emotion into their performance.

“It took away everything and your movement spoke. They say less speaks more and that’s what I felt,” she added.

Anton du Beke was also blown away by their sensual routine, and called it a ‘beautifully mature performance’.

John and Johannes will be competing against Rose and Giovanni in the final, after AJ and Kai had to drop out

John previously said that the dance made him cry when they began rehearsing it, and said he was relieved to be ditching the masculine routines for something more ‘sensitive’.

“I’m not ashamed to admit this, when we danced it I actually cried,” he said during an appearance on It Takes Two.

“Because we have done all these masculine things, these very powerful things, which have been great, but to finally show a sensitive emotional site, it’s beautiful,” John shared.