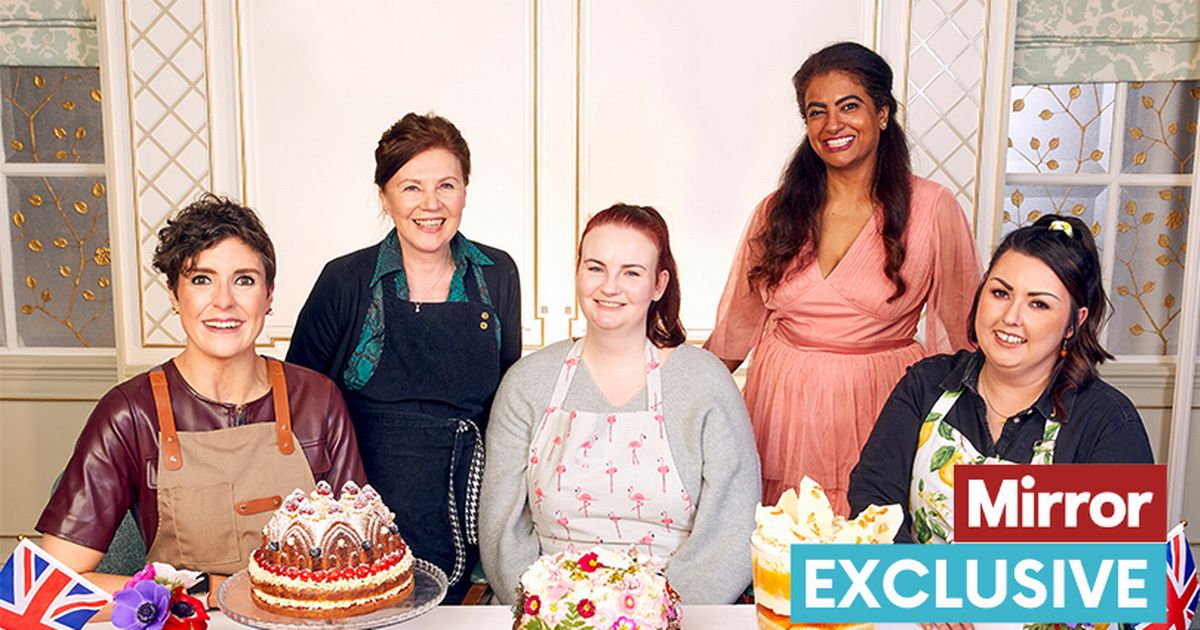 Pavlovas, cheesecakes, steam puddings, tarts, sponges, you name it, it was baked – all in a bid to find a pudding truly fit for our magnificent Queen.

Some 5,000 people took up the challenge to make the perfect pud to mark celebrations for the Platinum Jubilee. And tonight the final five will be whittled down until a winner is crowned on TV.

But were they chosen?

“It was very much like auditioning cakes – rather than the bakers,” says royal grocer Fortnum & Mason’s executive chef Roger Pizey, one of those who had to pick a short list.

“We were just looking at the recipes first – and judging on that. From that, we took it down to about 150. Then we looked at pictures, and then we narrowed it down to about 50 to 60. And then on from there. It was a mammoth undertaking and honour.”

He admits he came across a varied and, at times, weird range of cakes, which will have a starring spot at the Big Jubilee Lunch.

The Queen is celebrating her 70-year reign
(

Roger says: “I saw plenty of gin cakes, cakes within cakes and dubonnet and gin –complicated ones which ran to about seven or eight pages long. I was very surprised by the number of fine dining entries we received.

“Some of these creations would have been fabulous served at a restaurant but not something you’d present at the Jubilee Lunch.

“It was very important that the recipes were what anyone can do at home – with no fancy equipment.”

He says: “The winning baker will be making history here. This will never again happen in our lifetime. This pudding could be alongside coronation chicken and Victoria sponge as a historical dish enjoyed for years to come.”

And, in 1953, Poulet Reine Elizabeth, otherwise known as coronation chicken was created for the royal banquet to celebrate her majesty’s crowning glory.

Roger Pizey has given his verdict on the cakes
(

It was created at the famous Cordon Bleu cookery school but the recipe has changed dramatically over the years. Angela Wood, who was then a 19-year-old student was asked to help perfect the recipe.

Shabnam’s cake reflects the Queen’s love of the Commonwealth

For the Platinum Jubilee, bakers aged eight to 108 – from Glasgow to Lancashire, York, Derby and Nottingham – submitted recipes with pictures and stories behind their inspirations.

Buckingham Palace head chef Mark Flanagan stepped in to help pick the final five before handing over to a judging panel.

The finalists with the judges
(

Roger says there while was no fighting over pudding; the competition was a battle of baking brilliance right from the very start. He says: “Some of the entries were so very, very close to making the final.”

One of these bakers was Valerie, 73, from London, who impressed Roger with her pudding entry – which she baked for her street party for the Queen’s Coronation when she was 14 – made with elderflower and strawberry mousse with shortbread at the base and white chocolate around the edge.

He says: “On the recipe alone, I knew it would be a great pudding, but when I read the story behind I thought wow that was just amazing. Having someone who baked a cake for the ­coronation and now baking for the Platinum Jubilee ‑ and the exact same cake.”

Valerie says: “When I first baked the cake for the coronation – it was for a street party – well, actually, it was a car park party. Back then, we didn’t have cream – we couldn’t afford it, so we used condensed milk, which worked just as well.

“My friend first read about the competition in the newspaper and just told me I had to do it.”

Roger says even he learnt a few tips and tricks from the wartime culinary ways used in many of the entries – a nod to the rationing at the time.

“The recipes that amazed me were the ones that were passed down by generations. A family recipe to help celebrate the ultimate family matriarch – the Queen.”

But it is not just the story behind each entry that counts.

After all the proof of the pudding is in the eating.

Kathryn’s cake is a passion fruit and thyme frangipane tart

The judges tonight are looking for exceptional taste, good presentation, a memorable story and something that could be easily recreated in kitchens across the country.

Here, Roger gives us his exclusive take on each of the cakes that have made it through to the final…

of Argyll and Bute, a retired sales manager who now works for the National Trust

Roger says: “White chocolate mousse flavour and the Welsh cakes that were as a base. I love a Welsh cake! Susan also used rhubarb, which I think is very underused. All in all, a perfect representation of all four nations and a celebration all four nations.”

Shabnam Russo, in her late 30s

mother of two and skincare specialist

Pud: Rose falooda cake reflecting the Queen’s love of the Commonwealth. It’s based on a favourite sweet of her grandparents in Mumbai. Falooda is a cold milk-based dessert, developed during the Mughal empire, made with vermicelli and usually flavoured with rose syrup and basil seeds.

Roger: “Another original. I’ve never come across falooda in a cake. It’s usually a rose syrup drink but converted into a cake! Iced with mascarpone vanilla cream. And with the lovely edible petals and fresh flowers. Stunning.“

a copywriter from Southport, Merseyside

Pud: A lemon Swiss roll and amaretti trifle pudding. Inspired by the lemon posset served at the Queen’s wedding in 1947.

Roger says : “Exceptional. In seven layers, she made all the ingredients herself. I really enjoyed the lovely flavours of the lemon and the orange juice.

“It’s an old traditional dessert – a trifle, but this felt fresh and different – especially with the amaretti biscuits layer bringing a different flavour.”

composer and oboist from Oxfordshire

Roger says: “Katherine made this wonderful passion fruit tart with a frangipane bottom. Really elegant and lovely. Very well made, and well thought out – having a rich cheesecake in a tart sitting on top of the frangipane. It was nice to see thyme in her pud, a lovely example of bringing in different flavours.

“At first, I thought it sounded very interesting, put it to one side, I looked at the picture and thought it looked amazing.”

a lawyer from Warwickshire

Roger says: “Again, very elegant, looks like a crown, beautifully piped. When I was looking at the recipe, I saw that the dubonnet was coming through quite a bit as a staple ingredient.

“I’m a pastry chef; we put alcohol in nearly everything. Boozy food is fine – as long as you burn it off!”