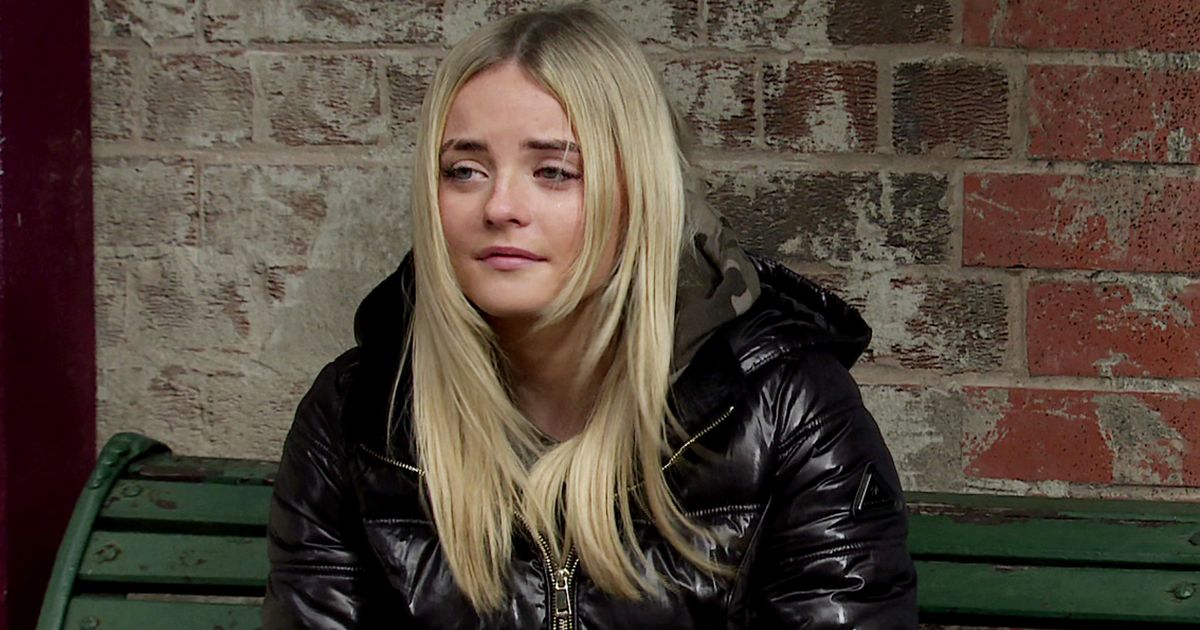 It’s a week of deception and rock bottom lows for the residents of Coronation Street next week.

While one resident finds her solution to her woes at the bottom of a bottle of wine, another tries to turn to drugs to end her sorrow.

Thankfully, the attempt is impeded – which she is grateful and soldiers on as best as she can.

While another young teen’s secret struggle is exposed by her best friend, but will she get the help she desperately needs?

Here’s what’s coming up on Coronation Street next week…

Toyah, played by Georgia Taylor, has longed to be a mother for years, so was left devastated when she discovered partner Imran had a love child with Abi from their one night stand.

On Friday, Imran’s lies were finally exposed after Kevin discovered his name on Alfie’s birth certificate.

While Toyah and Imran had been trying to impress the social worker in order to adopt Elsie, Toyah had received a text from Kevin – which involved a picture of the birth certificate.

Unable to keep her anger from boiling over, Toyah confronted Imran and he admitted everything – including that he had known the truth since New Year’s Eve.

Sickened by his deception, Toyah threw him out and he met with Abi in the pub, revealing that Elsie’s adoption was off.

After being confronted by Kevin, Imran returned home and Toyah insisted that Elsie deserved a “proper” family.

Next week, Toyah is left struggling when Elsie leaves with the social worker and drowns her sorrows in alcohol.

Deciding that she needs to have it out with Imran, she heads to the solicitors but Adam tells her that he’s gone to visit Imran.

Imran turns against Abi to get custody of his son

Later, Imran returns and pleads with her to let him put things right, but she leaves him in no doubt about how she feels.

He decides to go flat hunting and suggests to Abi that she and Alfie move in with him, but she turns him down.

Imran is later left alarmed after Kelly tells him that Abi saved her by taking the morphine, worried that Abi is now in possession of the bottle.

The lawyer admits his fears to Toyah and decides that he wants to fight for custody of Alfie and would like her to help him raise his son.

What will Toyah say in response?

Abi is determined to fight Imran for their son

Meanwhile, Abi is determined to return to work so that she can afford to buy things for Alfie.

However, she’s shocked when she finds out about Imran’s plans to fight her for custody of their son.

As a result, Abi meets with her solicitor and tells him that she wants to apply for full custody.

She later approaches Imran and tells him of her intention to fight him all the way for custody.

Yet Imran still has some dirty tricks up his sleeve…

Faye Windass is left devastated as boyfriend Craig Tinker makes a bombshell confession about their future together.

This week, Faye and Craig were left shocked when she realised that Emma has been secretly dating Ted Spear’s grandson Jon.

Faye and Emma had been involved in Ted’s death on New Year’s Day after running him over with their car. Despite him seeming OK when they brought him back to his home, he later died and they didn’t call for an ambulance or the police.

Faye is upset by Craig’s bombshell

As the group row, Faye was rushed to hospital over fears for their baby and they were forced to anxiously wait for an urgent scan.

The pair were shocked after being told that Faye wasn’t actually pregnant.

Next week, Faye is back at work as Sarah tells her and Michael that they desperately need more orders and that they’re offering a weekly bonus as incentive to the person with the best sales figures.

Later, as they’re in the factory, Faye shows Craig a fertility app that she has downloaded onto her phone.

But Craig is unsure about the speed at which they’re going in starting a family.

He speaks to his mum Beth and reveals that Faye wants to start a family, but admits that he feels it’s too soon and doesn’t have the heart to tell her.

Not one to hold back, Beth tells Faye that Craig isn’t ready for a baby, leaving Faye completely stunned…

Kelly Neelan will find herself turning to drugs after her mum Laura tragically dies.

But, knowing that she would die and Kelly would lose all of the parental figures in her life if Gary were to go to prison, Laura lied to the police and said that she had murdered her husband.

Following her mother’s death and – not knowing the truth about her tragic sacrifice – Kelly tries to come to terms with what has happened.

Kelly struggles over her mum’s death

However, Kelly is overwhelmed when she discovers she will inherit everything from her dad, including the family home.

She asks Gary to go and check on the house for her and when he goes there, he’s faced with a photo of a smiling Rick.

After he packs up some belongings and heads back to Kelly, who is overcome with emotion as she sees the reminders of her childhood.

Numb with misery, Kelly takes out her mum’s bottle of morphine from her pocket and unscrews the top, just as Abi arrives…

Abi manages to intervene and takes the morphine away from her and Kelly later tells Imran about how Abi saved her.

She attends her dad’s funeral next week

Yet Imran looks set to use this against Abi and, knowing that she is in possession of a bottle of morphine, intends to fight for custody of Alfie.

Later, Maria admits that she’s considering not attending Rick’s funeral as she has her council reputation to think about, but Gary is angry and says that she should put Kelly first.

At the end of the week, they all attend the funeral and Gary is left glancing around nervously, hoping that none of Rick’s acquaintances turn up.

While they gather at Rick’s graveside, a man approaches and spits on the coffin, telling Kelly that he hopes he rots in hell.

Snapping, Gary punches the man – a moment which is captured by a man hiding in the bushes…

Amy Barlow will be left shocked next week as she discovers Summer’s eating disorder.

Summer’s adopted dad Billy has grown increasingly worried over behaviour, and will be left deeply concerned after realising she’s been up all night revising.

The vicar warns her that she’ll burn herself out, which will send her blood sugars all over the place.

Aadi heads over to see Summer, but she refuses to speak to him and, when Billy reminds her that she promised to help out at church, she insists that she hasn’t got the time.

Worried, Billy asks Amy for help in speaking to Summer and so the teen persuades her friend to take a break and have a coffee.

Roy gives the girls bacon sandwiches on the house and Summer pretends to be grateful as they take them back to the flat to eat.

Summer begs her not to tell anyone

Amy leaves, but is forced to return after forgetting her phone and is shocked to hear Summer retching in the bathroom.

Summer tries her best to deny making herself sick, but Amy isn’t convinced and threatens to tell Billy.

But Summer is terrified and begs her not to, promising that it won’t happen again…